To mark the studio’s 60th, Louise Leonard explains how to make print magic 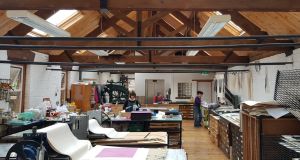 Graphic Studio Dublin will hold an exhibition on December 12th to celebrate its 60th year.

While printmaking is almost as old as art itself, Graphic Studio Dublin celebrates its birthday this year, marking 60 years since the printmakers first opened in a basement on Dublin’s Mount Street. The studio was founded by five artists, one of whom was Anne Yeats, daughter of WB himself. Now in a lofty former brewery in Dublin’s docklands, and with a gallery in Temple Bar, the studio’s members are gearing up for some (safe) celebrations.

Louise Leonard became a member more than 15 years ago, having taken courses with the Graphic after graduating from NCAD in the late 1990s. Always passionate about print, “I’d been making lino cuts at home, more or less with the back of a spoon, chipping away,” she says. “And I met [fellow artist] Stephen Lawlor. Our sons went to the same school, and he said ‘Why don’t you…?’”

Leonard describes finding herself, one dark, wet winter evening, in the docklands, staring at a forbidding metal door. “There was nothing down there, no Bord Gáis Theatre, no Harry Crosbie – and I knocked on the door, and then the smell of the place, and I thought: ‘Oh my God I’m home’. The ink, the bitumen… I was completely hooked.”

Leonard’s frequently dreamy rural scenes belie the pure physicality of making them but, she says, there’s much more to it. “It’s the process, there’s a great romance to it.” She describes the warmth of a copper plate, the beauty of the grain in birch wood and as she talks of litho stones, I want to be there too.

Surely the quintessence of material romance, litho stones are made from Bavarian limestone. “You can’t get them any more, it’s all quarried out,” Leonard says. The stones are ground down “like a big thick windowsill” and an artist will etch their work onto the face to create a print. The next person to use the stone grinds it down some more. A stone can last for years, making print after print.

Leonard’s talk is peppered with brilliant words and ideas. From specialist papers such as Fabriano and Hahnemuhle to diamond-point needles: “It’s the tiniest tip of a little industrial diamond – you wouldn’t be wearing it on your lapel.” About spit-bite printing she says: “You used to spit into the acid to make it gooey, we don’t any more, we use Fairy Liquid.”

“We like to tell people when they come in that Rembrandt would know how to use our materials. It’s a pretty ancient process. It’s like alchemy that you can get this magic from a sheet of copper. We use the same rosin that a violin maker would use on their bow or a ballet dancer would sprinkle on the floor to get a grip. We sprinkle it on a plate. And burn it – there’s a lot of burning going on. The rosin comes from pine trees so you get this wonderful smell. And then you put bitumen on and immerse it in acid – it’s like you’re making a pact with the devil.”

It’s easiest to imagine printmaking in reverse. Colour, tone and shade are built up from the lightest first. “Even the image is reversed, I think that’s why it attracts wacky people as you have to think backwards. You’re thinking backwards all the time, just like the old-fashioned typesetting in newspapers where the words would be reversed.”

Leonard’s own prints are made using four different colour plates, but others, such as Jennifer Lane’s woodcuts, are made from a single block which is recut after every print layer. “Each print in the edition is almost identical – you want them to be the same. It’s very painstaking,” Leonard says. Print editions can run from a single print to the low hundreds. So is it true that lower edition numbers are better? “Some people like to think that way, there is a snobbery,” says Leonard, but insists that from an art point of view it doesn’t actually matter.

Essentially you’ll want “print number one” if you like generally to be number one in other areas of your life, but that’s the only reason to care about it. In fact, in the past, many artists didn’t number their prints at all. “Whistler would never have numbered his editions.” Hokusai (the 18th century printmaker most famous for his Great Wave off Kanagawa) neither numbered his prints, nor printed his own. He sent them to a workshop.

Discovering how prints are made makes them even more fascinating, and one of the most pleasing things about them is that they are more affordable and more democratic than a one-of-a-kind art work. “While it is more affordable, the artist has touched and worked on every single one,” Leonard agrees – unless you’re Hokusai, obviously.

“It’s really nice,” she continues. “If 10 people like a print, 10 people can have it.” And as the Graphic Studio also have a visiting artists programme whereby artists get to work with a master printmaker to realise their ideas in print, it is even more democratic than ever.

So who should people look out for? “Don’t buy something because you think it’s by somebody famous,” Leonard insists. “My advice is to look. Only buy what you like. Buy it if you’re going to want to look at it for a long time to come.” Or sign up for a course, to discover the mysteries of making wonderful prints yourself.

Find a trove of work for sale online at graphicstudiodublin.com.

The exhibition, Diamond Point, celebrating 60 years of the Graphic, opens on December 12th at the Graphic Studio Gallery in Temple Bar.

“There’s a fashion with framing,” says Louise Leonard. “These days people want a nice simple wooden frame, ash or oak. We frame to let the work be the star.” She describes an exhibition looking at 30 years of work from the Graphic, and seeing the taste and style in frames changing over the years. “It was definitely more ornate in the past.”

To keep your print safe, the best glass is UV-protective, non-reflective museum-quality glass. “It makes the work jump right out, and it’s really beneficial. But I still wouldn’t hang an artwork in direct sunlight.”

What about hanging over a fireplace, often thought a no-no? “That should be fine,” she says. “The glazing should protect it properly and if your chimney breast is getting hot you’re in trouble anyway.”

The Graphic Studio sells works framed and unframed, and can advise on framing and arrange it for you too.