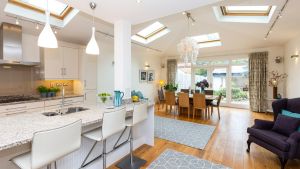 Number 19 Grosvenor Place last changed hands in the mid-90s when the young family moved into the mid-terrace period redbrick.

One of the owners, who has a background in design, remembers that some of the things that drew her to the bay-windowed property included the long front garden, the high ceilings inside and the potential offered by the rear access. Her key words when househunting were, she says, “space, character and light” – all features of the Rathmines house.

That potential was realised during a major renovation in 2009 when a new eat-in kitchen extension was built to the rear and a garden room was added. They are the sort of spaces that a decade later growing families are looking for when they trade up. The house, she says, grew as the family grew and now, including the studio, has 238sq m/2,560sq ft.

Criteria for the extension at the time included enough room for a table that could extend for entertaining, a good working kitchen “vital,” she says, “for a real foodie family” and plenty of natural light – hence the many large rooflights.

A heated utility room on the way into the new extension was fitted with acoustic fireproof insulating board to reduce any noise of a spinning washing machine.

The interconnecting reception rooms have their original fireplaces, attractive cornices as well as sash windows installed by the owners, and the rear room, has proven, she says “very versatile over the years, as a formal dining room, then study or music room or just another room to watch sports on TV”.

There are four bedrooms, the largest is en suite and runs the width of the front of the house; its bay window an attractive feature. The rest of the bedrooms are to the rear, including one in each of the returns.

The studio which spans the width of the rear garden was designed as a versatile space, as a home office, work studio or potentially a living space in case one of the now grown-up children needed it. As it happened they didn’t, and the couple are now downsizing. It has been, says the owner, a well-used space, the accordion glazed doors – she describes them as “an extravagant addition” – fold back to fully open the room to the garden.

New owners may, over time choose, to update the family bathroom and en suite but will find the house in walk-in condition, its smart decorative look in terms of colours and finishes carefully chosen by the owners. Number 19 Grosvenor Place is for sale through DNG seeking €1.25million.