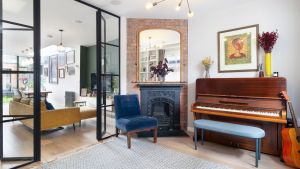 The two-storey extension to the rear of 7 Chaworth Terrace has made all the difference to the redbrick terraced house on Hanbury Lane, off Meath Street in the heart of the Liberties.

It made space for a light-filled, eat-in kitchen downstairs and a larger double bedroom upstairs and, because the owner insisted that the old redbrick from the back of the house be reclaimed and reused in the build, from the rear garden with its Crittall-style windows and doors it is a seamless mix of old and new.

It also meant the bathroom – located before the extensive renovation in a downstairs lean-to – could be brought upstairs. Adding on to the rear of a terraced house risks robbing the light from interior rooms, but this was avoided by installing a large rooflight in the extension. The position of the stairs was changed to make better use of space.

Now the three-bed house has 93sq m/1,001sq ft of space as well as a garden room used as a studio for one of the owners, who works in the arts. Her careful detailing – she collected ideas on Pinterest before the 15-month-long renovation – and love of industrial design followings stints in London and New York clearly influenced the overall design.

In the kitchen, the flooring is polished concrete, some redbrick walls were left exposed and the Crittall-style screen divides the small room that the front door opens directly into from the living room and the kitchen. The owner travelled to the UK to visit Crittall in her search for the perfect doors but considered it too expensive, eventually sourcing, also in the UK, a less expensive version of the much sought-after steel and glass doors.

“I actually prefer this door,” she says of the sleek room-divider, noting its slimmer glazing bars.

There’s now also a downstairs toilet and upstairs there is a small room in the attic. Built-in seating along the wall in the south-facing rear garden is another attractive detail. Parking is on street.

The young couple, now with two small children, are moving from this city street to the suburbs and have placed 7 Chaworth Terrace on the market with DNG for €595,000 – a price level more typically associated with southern parts of Dublin 8, out near the canal or South Circular Road.

A near neighbour to this house, number 5, also very smartly refurbished but smaller and with two bedrooms, recently came on the market seeking €475,000 and is now sale agreed.