From Dublin to Fifth Avenue: A marriage made in design heaven

Bryan O’Sullivan and James O’Neill’s projects include Ballynahinch Castle, where they recently wed 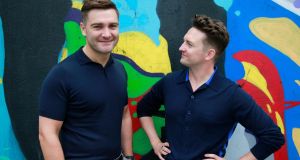 When an Irish, London-based interior design outfit was tasked with reinventing part of the five-star Berkeley Hotel, the bar, as it were, was high. The Knightsbridge hotel is already home to the Blue Bar, by the late Irish architect David Collins, who designed everything from Madonna’s apartments to Alexander McQueen’s store. But the Berkeley Bar and Terrace was about to become Bryan O’Sullivan Studio’s calling card.

The results are beautiful, and the British press has rushed forward with praise. A Daily Telegraph headline read “Why the Berkeley Bar & Terrace is London’s chicest new hotel bar.” Wallpaper magazine declared the redesigned bar was “filled with clever references . . . deftly sidestepping the space becoming too dark and oppressive”. Tatler decided: “Your Instagram is about to go into overload.”

Wood panelling is made from a single 300-year-old walnut tree, which fell during a storm in 2007.

Before moving to London, James O’Neill was a prominent face in Dublin clubbing as one of the forces behind the infamous War club night at Spy

Everything in the bar was designed by the up-and-coming studio, from the lighting to the furniture, “literally down to the candleholders”, O’Sullivan says, over breakfast in a cafe on Thomas Street in Dublin, with his husband, James O’Neill, the studio’s commercial director. Another young Irish talent, the studio’s director Evelyn Conway, is back in London.

The studio was founded by O’Sullivan, from Kenmare in Kerry, in 2013, when he took on a project after working with the architect and designer Luis Laplace in Paris. Conway came on board and they set about building a design studio that refuses to repeat itself from project to project.

In a few short years, the young company, where Irish talent features strongly, has designed an apartment overlooking Central Park on Fifth Avenue in New York, yachts, a private jet, large residential projects – including a lengthy 1920s townhouse project in Paris – hotel spaces in Dublin, Girona and Cambridge, a villa in Ibiza, and other private residential projects, along with interiors at Ballynahinch Castle Hotel in Connemara, where O’Neill and O’Sullivan recently got married.

O’Sullivan always wanted to work for himself, inspired by his mother’s work ethic – she ran a cafe in Kenmare. As a child, he spent a lot of time with his grandfather, a builder and self-taught draughtsman. O’Neill too is inspired by his mother, the artist and the first female president of the Royal Hibernian Academy, Abigail O’Brien.

Before moving to London, O’Neill was a prominent face on the Dublin clubbing scene as one of the forces behind the infamous War club night at Spy and then Alt, as well as a singer known as Bitches with Wolves, before joining his partner at the studio in 2016.

“I don’t think I was intimidated,” O’Neill says of the career change, “I think I was hungry. I had worked in music before, and basically I turned 30 and wasn’t Beyoncé and thought, what are I doing with my life? What’s the long-term goal here? I started working in fashion and quickly realised that would be a very difficult industry to maintain a quality of life in. I was working with Henry Holland which was an incredible experience, and he was amazing . . . but I realised I needed to play catch-up and get into something and make it work. When you’re working with your partner, it’s not just a job, it’s your life. You’re building a future together.”

The spaces they design look like people actually live in them, where things look well-made rather than highly stylised

If the studio does have an aesthetic despite its diverse approach, it’s a sentiment that often leans into classic, clean and comfortable styles. The spaces they design look like people actually live in them, where things look well-made rather than highly stylised, and where you’re as likely to find a Niall Sweeney piece on the walls as you are a piece of furniture from Dunleavy Bespoke. On what they offer, O’Sullivan says simply, “I think a fresh approach.”

Nowhere is that freshness more evident than the inspired mural at the snug in the Berkeley Bar by the American artist TM Davy. “We were playing around with the idea that women used to have to sit in the snug, and men were in the main space,” O’Sullivan says. “We wanted to flip that, where the snug in this bar was the most fab place, more feminine, and the place you want to be.”

O’Neill and O’Sullivan spend a lot of time travelling, both on international projects and for inspiration. A trip to Havana last December provided inspiration for a cigar shop project that came up when they returned home, and for which they’ll be referencing “a lot of the pharmacies we saw in Cuba, which are very distinct timber-clad decadent spaces”, O’Neill says.

Other upcoming projects include a hidden speakeasy-type bar in Mayfair, and suites at Claridge’s Hotel. The studio is also working on Cashel Palace Hotel in Tipperary. “A lot of restoration,” O’Sullivan says, “Very traditional, but it will be a stunning project.”

With projects coming thick and fast, and the team now numbering over 20 people, O’Sullivan enlists the assistance of his father, the former Kerry football captain and ex-manager of both the Kerry and Limerick football teams, Mickey Ned O’Sullivan, to travel to the studio’s office every four or five weeks to lead team-building exercises.

“He’s got a great energy, very calm, amazing at extracting the best out of people, and making them feel they can do whatever they want to do,” O’Sullivan says. O’Neill concurs: “When people are happy and feel heard and feel that they’re part of something – which they very much are – they do their best work.”

Respect for the studio’s team is at the fore of their success and conversation. O’Neill calls Conway “phenomenal”, with O’Sullivan talking at lengths about how she led that 4½-year Paris townhouse project, dealing with 35 separate trades on site in fluent French, when she was just 23.

With Pinterest-driven tropes crowding so much interior design at the moment, what about trends that are grating with O’Sullivan at the moment? “Tiles that look like timber. Why would you do that? I always think things should be what they are. That and ceramic tiles that look like marble. Everyone’s like ‘Oh, it’s almost [as good as].’ But they’re usually as expensive as the real thing. Things should always be what they are and you shouldn’t make things look like something else.”

People get saturated with certain things, and then they’ll do a U-turn. I think people want calmer spaces, a bit more Zen

O’Neill’s bugbear is “crap modern architecture – show-houses in London, these white rectangular box houses that are cold and hard”.

Some of O’Sullivan’s favourite things include the textile designer Toyine Sellers, Kempton Racecourse as the spot to buy furniture, and AD Intérieurs in Paris as a good place to spot emerging trends. He also sees the gravitation towards maximalism receding: “I feel lately it’s taking a step back again, a bit more minimal, and a bit more contemporary. We went through a maximalist period, a revival of Victorian, but lately things are going a little bit cleaner again,” he says.

“We reached peak maximalism with Annabelle’s [club] in London,” O’Neill adds. “It’s fabulous and it has its importance, but you couldn’t go any further than that.”

O’Sullivan agrees: “People get saturated with certain things, and then they’ll do a U-turn. I think people want calmer spaces, a bit more Zen. You have to be able to spend time in spaces and feel relaxed, and not feel like you’ve got something jumping out at you. That’s a huge part of design; you have to feel relaxed in the space.”

For a moment he drifts home, “I’m thinking of Packie’s restaurant in Kenmare. I think the simplest places are the best.”