From party house to family nest: a two-up two-down in the city grows up

A Dublin cottage redesigned by its owner has a cool, calm interior 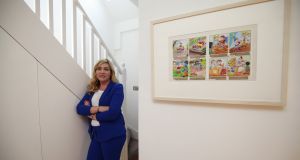 Having grown up in Rathfarnham and commuted to college right across Dublin to DIT on Mountjoy Square, the interior designer Jane Higgins was determined to live in the city centre when she bought her first home in 2003.

“My friends were scratching their heads about it: they tended to stay near Rathfarnham or move further out of the city.” It suited her though, as she was working in the city, and the house “has a lot of happy memories. It became the pre- and post-pub house to go to.”

The two-bedroom house, on Thomas Davis Street near Christ Church, in Dublin 8, was also a place where Higgins could apply her design skills, although she did suffer from that common complaint interior designers and architects have about being too busy with clients to brush up their own homes. Cue the truism and analogy about cobblers’ families having no shoes.

The orange had to go

Most of the walls in the house were orange when Higgins arrived so she painted them white, ripped out the carpets and sat tight for a few years to understand how the house worked. “I wanted to get a feel for the space and I wasn’t in a major hurry,” she says.

What emerged was a lack of storage, and how a corridor beside the kitchen, leading to the bathroom, took up valuable space, as did a lobby inside the front door. “Space was at a premium so I couldn’t afford to have a porch,” says Higgins, who dismantled it and painted the back of the front door in a dark colour and put curtains across it so “you’re looking at a softer curtain here and not just back of the door at night”, she says.

Higgins was able to create more room by getting rid of the corridor and adding the space to the bathroom, making it relatively large for the size of the house. A small shower and bath were taken out to be replaced by a walk-in shower and Higgins designed a tiled floating shelf for the basin.

While the walls in the rest of the house were painted white, the bathroom became a dark space – painted in Farrow & Ball’s London Clay – creating drama that was augmented by concealed lighting behind a mirror and an exposed brick wall. Beyond the remit of the builders, the job of knocking off the plaster went to Higgins’s father. “I’ll always have precious memories of him doing that,” she smiles.

While it may seem a complicated and expensive decision, lighting effects are actually a relatively cheap and easy way of adding to an interior, says Higgins, if you have an electrician who can source the products and fit them. “It can transform a space without spending too much money.” She has low-level lighting beside the stairs and behind kitchen units, along with the illuminated bathroom mirror. She solved the issue of having just one pendant light in the centre of the living room by attaching it to a long flex so it can move about the ceiling. A hook above the dining table beside the window means the light can be hung there when needed.

In this room she added solid oak floors and a Crema Marfil hearth, lifted from the ground. The floor extends to the kitchen where she put in Miele appliances and kitchen (now branded as Warendorf) with handle-less, push-action doors. They came from Arena Kitchens, where she was working at the time.

Higgins fitted a washing machine into the galley kitchen but also wanted a dryer, which she managed to plan into the storage space she created beneath the stairs, where the vacuum cleaner and coats live too. To avoid “just getting a gable end” at the back of the stairs, she set in red shelving, whose colour is picked up in a red velvet armchair and footstool from Habitat. “To give a pop of colour to the room.”

A house for that time of her life

It was a great home for that time of her life, says Higgins, who recently married and has a son. Now it is time to move on, although she is staying close to the city centre. The house is for sale through DNG for €395,000. The house even played a part in the couple’s courtship. “When we began dating my husband also worked in the city centre and lived nearby. He used to walk past my house every evening so I’d get a text saying: ‘I’m on the flight path, any dinner going?’ I had an Italian housemate at the time who was a great cook so there was always something tasty going, even if it wasn’t cooked by me.”

Share your homestory: Have you recently extended, renovated or built youhome? If so, we’d love to hear how you got on. Please email homeanddesign@irishtimes.com