Nuns' designer trunk discovered after decades in a shed 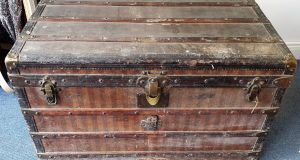 An auction at Purcell’s in Birr, Co Offaly, this coming Wednesday offers some unusual treasures, but the unknown stories to some of the pieces are what make it rather interesting.

Take the Louis Vuitton steamer trunk which Purcell’s is listing for €300-€600. While these pieces can fetch enormous prices at auction, and indeed are now elevated to furniture status in private homes, this weathered old trunk has spent almost a century in an Irish shed.

Dating from circa 1900 and with the serial number 30797, the piece which has Cunard White Star and Coras Iompair Eireann shipping labels, arrived in Ireland in the 1930s accompanied by two nuns.

Like today, these trunks cost the equivalent of a high-end car when constructed in the early 1900s, and the story of how two women living under the vows of poverty and obedience in Co Clare, ended up with the expensive piece of luggage is a mystery.

The trunk features the monogram A.L.F and also bears the lock key number 03168, so it is perhaps possible to trace the original owner through the company and find the history of this centenarian case.

In any case, it is doubtful that the women realised its value at the time considering its resting place since 1930.

Along with old advertising signs, including a rare Malone’s of Dublin advertising mirror (€300-€500) and Shell Oil and Esso cardboard signs (€60-€80) the auction lists two Mombasa Motor Club Plaques (€10-€20) which in themselves are certain to have an interesting provenance.

Boxes of Waterford crystal glasses have low estimates, with one box that appears to have in the region of 22 Champagne glasses seeking €30-€40; an old cast iron pink post box is listed at €180-€220.

Three lovely wooden dough bins are listed for €20-€40 apiece. In the days before plastic and when bread making was a necessity rather than a skill, dough bins were passed down through the generations of a household.

The renewed interest in bread making especially sourdough – which is the world’s oldest form of leavened bread – took an interesting turn this week.

Seamus Blackley, the co-inventor of Microsoft X Box video game, along with a microbiologist and an Egyptologist, harnessed dormant yeast from Egyptian pottery over 4,500 years old to make sourdough.

Blackley tweeted of the bread, made with milled organic barley, einkorn, and kamut; ancient grains that would have been available to the bakers of Egypt’s Middle Kingdom: “The crumb is light and airy, especially for a 100% ancient grain loaf. The aroma and flavour are incredible. I’m emotional”

Though Blackley used a ceramic bowl for his Pharaoh-inspired bread, dough bins provide a snug warm place where bread rises prior to being baked. And it is not just the aesthetic of patinated wood, they are far more practical than other mediums. The heat generated by the yeast is retained by the wood, giving the dough an even rise, and because of the elevated sides, it helps to protect the little bundle of alchemy from draughts.

If their age puts you off, they can be sanitised with a vinegar bath, of one part water to five parts vinegar, and maintained with a natural oil such as Wicklow-based Atlantic Aromatics Sweet Almond Oil.

And in Irish tradition a cup of tea alongside home-made bread could be served in the unusual Satsuma tea set dating from the 1800s. Taking its name from the Satsuma region in Japan where this style of porcelain originated, the 15-piece set has remarkably survived the past 200 years.

All the exteriors and interiors are painted by hand, but to be honest the two fellows in the base of the cups look rather cross. Perhaps two centuries of scalding tea poured over your head has that effect. €100-€200. See purcellauctioneers.ie