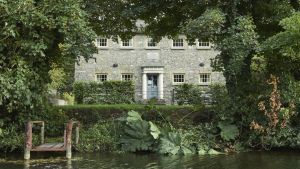 The Old Schoolhouse in Ardclough in Co Kildare dates back to 1839 when it was constructed by Lord Cloncurry, a canal enthusiast and resident at Lyons Hill Estate. Cloncurry built the school to educate children of families working for the Grand Canal Company, of which he later became chairman.

To put this into perspective, 53 per cent of the population at the time were illiterate, and the school, when it first opened in the village had 200 students .

Over the years it was used as a village hall and later as a hay shed, until it was purchased by artist Philippa Bayliss who converted the 189sq m (2,034sq ft) property into a family home.

Subsequently, in 2005 it was bought by Harvey Appelbe and his wife Ciara. “While it had fantastic features and we really fell in love with it, the house never had proper plumbing and there was a tree growing in one of the windows,” says Appelbe of their home which is now fully renovated and in turnkey condition.

“The first five years in our first-ever home were absolute hell; the roof was rotten and missing in parts, and we spent our time trying to balance along random timber beams because the floors needed replacing too,” recalls Appelbe.

But the bug of renovating an old gem has bitten, and the couple have just completed the substantial conversion of the Miller’s House at Ballymore Mills, where they will now live.

In addition they are hoping to convert the old mill itself, “and follow good sustainability practice – but flour milling is not feasible – so we are looking at a distillery”. To prepare for this task, Appelbe is currently undertaking a masters in distilling.

The Ardclough property on a third of an acre sits on the banks of the Grand Canal, which runs to the front. Started in 1792, the canal runs for 82 miles connecting Ringsend in Dublin to Shannon Harbour in Co Offaly. There are roach and perch in the waters, in addition to the beautifully plumed kingfisher along the banks.

But even more interesting among all this fauna and flora, the canal is also home to freshwater crayfish, which are now a protected species.

“In November thousands of crayfish huddle under the bridge – as it is mating season – and you can see them glistening in the light, and hear them crunching and squeaking, it’s really quite surreal,” says Appelbe.

The four-bedroom property, which has been completely renovated and beautifully furnished by Appelbe’s wife Ciara, is on the market through Coonan Property in Maynooth seeking €700,000.

This four bed extends to nearly 2,000sq ft is in need of refurbishment but comes with an enviable beachfront location
€1.1million
Agent: Gallagher Quigley

High-calorie, high-protein soup: Making the most of every bite
6