How do I formalise the property management at our housing scheme? 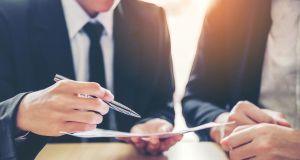 Proceed with caution: anybody offering property services needs a licence from the PRSA. Photograph: iStock/Getty

I recently moved from Dublin to a town in the midlands, buying a property in a development of about 50 houses and duplexes. We don’t have a formal managing agent, but a man who lives locally and has some building experience helps us out. He issues and collects the charges each year and does some maintenance work as required. I am sure that he is totally honest, but the arrangement seems quite informal. We recently had our agm, and I was disappointed to see that just four owners (including myself) attended. It would be great if we had a committee of maybe four to six active owners, so that our affairs could be run more proactively and formally. Would you have any tips for getting to that point? I also think a few simple upgrades and improvements are possible around the estate, and would also like to gain support to implement these.

Your query raises a few issues. To start with, it is good that you are taking an interest in your development. Most property owners in Ireland own a single property – the one they live in – yet it is surprising how many of them take no interest in their owners’ management company, or OMC, which owns the common areas of a multi-unit development and is responsible for their upkeep. The way an OMC operates can have a significant effect on the value of the property (and its rental value) over time.

That somebody is acting semi-formally as your managing agent raises some potential concerns. It seems that he is undertaking at least some of the functions of a managing agent in providing your OMC with property services (presumably for a fee), such as issuing service-charge statements and collecting charges.

A mix of people can help a board work better. A mix of ages and genders, for example, would likely lead to a better board than one of just retired women or younger men

As his work includes handling service charges, there are also requirements around how he organises the flow of funds and the bank accounts. This is very much in the interests of your OMC – if any service-charge money were ever to go astray, for example, then working with a licensed practitioner would give the OMC some comeback. The PRSA website includes a full list of licensees.

Your suggestion for a committee of about four to six people – either as the board of the OMC or less formally – sounds good. It is always useful to have a diversity of voices, but a committee of more than about six can get unwieldy. In many developments it can be hard to get even four to six people involved, but you may be able to limit their roles to specific tasks or for a particular period, at least to start with.

Also, a mix of people can help a board work better. A mix of ages and genders, for example, would likely lead to a better board than one of just retired women or younger men.

As for the implementation of change, I would suggest that you move one step at a time. If you can put a committee or board in place, and gain oversight of the development’s finances, then your group can consider its next steps. If the person working for you at present is not licensed, for example, then the next step may need to be to employ a licensed managing agent to carry out at least some of the functions you require. (This may allow you to continue working with the existing person for other functions.)

You could then consider calling a general meeting (or wait until the next agm), perhaps sending every member a list of your ideas for upgrades (perhaps with costs) in advance. This will ensure you build a coalition of support for whatever actions you plan, which is very important in any development, especially if the upgrades have implications for people’s service charges. – Finbar McDonnell