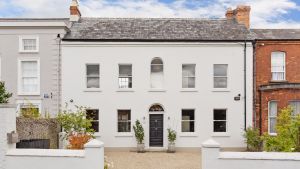 One of the oldest houses in Donnybrook, Ivy Lodge, at 62 Belmont Avenue has come to the market again. When it last appeared in 2015, the old farmhouse dating from 1740, a protected structure, sold for €1.052 million.

Back then, a fresh lick of pearly white paint and new carpets brightened up the whole house. But this was a cosmetic overhaul, and the charming pile needed extensive upgrading. Everything from the roof, plumbing and electrics – indeed almost like starting from scratch with a new build – needed replacing.

But, the long list of works ahead required planning within regulations of a protected structure. “Because of this, there were parts of the house where we could not use power tools, and the stairs had to be sanded by hand,” says the owner, of what was in its heyday a rural Georgian homestead surrounded by fields full of cattle. It now lies in one of Dublin’s most affluent suburbs.

Working with Jimi Johnson of Noel Larkin and Associates, the owner after spending a year to “think about light time and night time – when you know where the light will come in – and how the garden will impact the interiors at night”, settled on a design.

In the end, after the decisions on where to extend, and how to create an interior courtyard to avail of the morning light, the real protagonist was an old fig tree.

“Initially I had thought about gutting the garden, [which now even post extension stretches to over 100 feet], but after looking out at that fig tree over the year, I knew it was going to play a fundamental part of how it would all fit”.

The extension stops at the enormous fig tree – with sufficient deeply-lobed leaves to retain the modesty of Adam and Eve for decades.

For the interior’s palette “we mixed over seven colours to try and get a shade that would work with the fig tree” says the owner, of the blue-green walls and kitchen which overlook the garden.

To bring the garden inside, an enlarged paper mural of Vase of Flowers, a painting by Jan Davidsz de Heem, which hangs at the National Gallery in London, covers the wall on one side of the fireplace.

With the trials and tribulations of adhering to strict planning regulations, and headaches of a refurbishment, old houses often have hidden idiosyncrasies.

At Ivy Lodge, it was a little well. Remaining dormant for years, it has been cleared and plumbed for electrics – which is a definite selling point considering the size of the garden and the advent of water charges. It sits in little corner of the courtyard, where the old part of the house meets its contemporary addition – connected by an old granite wall swathed in Chinese wisteria.

The two reception rooms to the front of this gem, which extends to 253sq m (2,723sq ft) are smaller in comparison to some of its peers along the road, and with lower ceiling heights. But this in itself is testament to age of the house, which is just short of 300 years. To put this in perspective, it dates to when humans were much shorter in stature – as the low ceiling height between the kitchen and hall testify.

The property has four fine bedrooms over two levels upstairs, and a large family bathroom.

Essentially there are four gardens; the front, a central courtyard and a meandering rear flanked by old herbaceous borders. At the very end is a shaded space which has been cleared. It is the perfect spot for children to spend hours digging to discover all the creepy crawlies in an Irish garden.

The Georgian farmhouse is on the market through DNG, seeking €1.85 million.