Summer in a mobile home park: ‘It’s what Irish villages were like 50 years ago’

Mobile home owners keep coming back for a stress-free summer 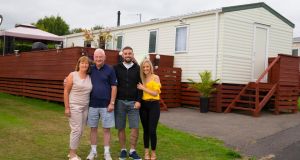 Even before the meteorological bounty that was the recent heatwave, waterside properties have been in high demand in Ireland. They usually come at a high premium, not least those in close proximity to Dublin city. Yet a growing number of people enjoy a reasonably priced summer right by the Irish beach, and with many a fringe benefit thrown in to boot.

You may recall a sepia-tinted childhood summer on the coast of Wexford, Mayo or Donegal, where the entire family decamped to a mobile home. Sure, it was cramped and basic, and possibly drizzly, but few bad memories ever really emerged from these summers.

As a holiday option, the mobile home summer fell out of fashion some decades ago with the advent of package holidays and cheaper internet flights. Yet in the years since, the living standards in mobile homes have improved exponentially.

Compared to a house in Dublin, a mobile home is inexpensive, but they can run to sizeable sums of money

“I liken it to what Irish villages were like 50 or 60 years ago,” observes Maurice Hedderman who, along with his wife Sue, spends the summer at the Prospect Park mobile home park in Ballymoney, near Gorey.

“People ramble up and down the park and you might invite them onto the deck for a cup of tea. People tend to bump into each other – it’s very much a community.

Maurice, who runs a financial planning practice with Sue, spent many of his childhoods in a mobile home park in Castletown, and wanted his three sons, now aged in their late 20s and early 30s, to enjoy a similarly carefree summer.

“When our oldest was two years old, we went to Spain and it was a complete nightmare,” he recalls. “It’s worse now 30 years on, with airport security. In Ireland, the biggest risk you face is the weather, and we honestly don’t even seem to notice when it’s raining.

“People ask me about the financial outlay all the time, and I describe it as the best investment I ever made in terms of my family’s wellbeing.”

Compared to a house in Dublin, a mobile home is inexpensive, but they can run to sizeable sums of money. Harry Farrell & Sons, for instance, offers new mobile homes in the €36,000-92,000 range, although they sell older models for as little as €9,000.

“At the lower end you get a good one, but they’re quite basic on the inside. The site fees are the equivalent of a two-week family holiday to Spain, around €3,500, and that includes ESB and water charges for the whole year,” says Maurice.

Adds Sue: “We have an apartment in Spain and given the choice, I’d honestly take Ballymoney. Some people might feel claustrophobic in a mobile home, for some people, it take a little getting used to.”

Dubliners Tom and Linda Mulrennan found a wily way around the space issue in their three-bedroom mobile home. With the help of a professional, they tore down walls to create space for a king-size bed and a second bedroom with more room.

The couple arrive at Lynders Mobile Home Park in Portrane, Dublin on St Patrick’s Day weekend, and leave on the October Bank Holiday weekend. There, they can avail of a number of on-site facilities, including a shop, laundry room, WiFi, 24-hour security and several large green areas with fine views of the sea and Lambay Island.

“Tom drives up and down to work in Walkinstown every day, not a bother,” explains Linda. “For the other 18 weeks of the year, we live with my daughter and her family in Dublin. Myself and Tom were divorced, and therefore too old to secure a mortgage. We didn’t have the option to rent, so we helped my daughter with the deposit for their house.”

Given the option, Linda would live there year-round, and knows many others of her age that gladly would, too.

“I would honestly love to see the government pass some type of law for mobile homes to be of a certain standard, and to have a winter package,” she says. “Many people I know would gladly sell their home if this site could stay open all year – think of the properties that would free up for sale.”

For Linda, the tranquillity is a major draw.

“It’s just so peaceful waking up to the sea every day, and it’s as beautiful in March as in October,” she notes. “Every mobile home has its own garden so I potter about and grow things like plums, apples, strawberries and tomatoes. Or I take the Kindle or my knitting outside on the decking.

“There’s no real clique or committee here,” she adds. “We’re all too busy entertaining our own folks. Some of us women will motor down into to the town and have lunch, for a bit of a bitch and a natter.”

Down in Prospect Park, meanwhile, Anne Lawlor, has spent 14 summers and counting there with her family. Her husband still works in Dublin year-round, and will join the family for summer weekends in Wexford. Anne finds the sense of community closeness a major draw.

“We’ve been really lucky that the kids made amazing friends, and got involved with everything,” she says.

“No disrespect at all to my neighbours in Dublin, but if I leave my older kids, who are 18, 19 and 21, here for a night and say to me neighbours to look in on them, I know they’ll be fine.”

“They got to play sports that they couldn’t have in Dublin, and trained as lifeguards. They have that freedom, yet we know it’s within a controlled environment. The youngest is 14 years now, and has hasn’t played the Xbox in four weeks.”

Anne’s spacious and modern mobile home means that she’s ‘never short of anything’.

“We have absolutely everything we need – a microwave, oven, fridge freezer, two bathrooms and three bedrooms,” she explains. “An apartment in Dublin would barely be kitted out much better.”

As a family of seven, spending a summer in a mobile home can have both its challenges and advantages.

“You definitely do have your closer moments and it’s lovely,” she admits. “It’s great to sit around and just talk. You have a different relationship with your children’s friends down here. It’s not like at home, where kids just meet up at the local shops. They see you all the time.”

Dubliner Sabrina Norton, also a summer resident of Prospect Park, echoes this sentiment: “In a space this size you’ve no choice but to get on with each other. You know when they’re about to push each other’s buttons and kick off, but it’s better to know what they’re like than not to know.”

Sabrina’s family is slightly younger than Anne’s – her children are now 11, 8 and 6 – and now in their fifth summer as Prospect Park residents, they avail of every activity on offer, every day.

With 140 mobile homes on site, around 70 to 80 families can be living on site at any given time. Art camps, basketball camps, surf camps, soccer camps, tennis camp and junior golf are arranged throughout the summer, while older residents can avail of bingo, table tennis, and full library with WiFi. Two large heated outdoor pools are also manned by lifeguards daily, with adult-only swimming reserved at 6-7pm. There is rarely room for boredom or screen time.

“Sure, we get a yearly bill for the site fees, but if you sent your kids to all of these activities at home, it would soon add up,” she says. “And a lot of other facilities don’t put on these extras.

“I asked my 11-year-old if he’d prefer to spend a summer in Dublin and he was like, ‘no way, I’d be bored out of my head’,” she says. “As a parent, it’s the network of other parents that are a big help. You can do carpools or babysitting, or someone will ask if you need anything from the shops. You can take or leave the events and socialising, but if you do take it up, it’s like living in another world. I’d be really hard pushed to give it up.”

If the bank valuation drops on a house we want to buy, will the seller negotiate on price?