Bowled over by a new age of aquariums

Marine biologist Kealan Doyle’s mission is to create high-end marine creature habitats. Just don't ask him for a goldfish in a bowl 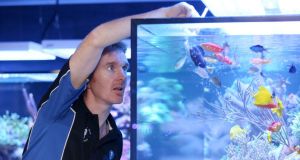 Seahorse Aquariums managing director Kealan Doyle: ‘It was really tough as I slept on the floor of this industrial unit every weeknight for two years, while my wife and daughter were in Connemara.’ Photograph: Laura Hutton/The Irish Times

There are not many shops in the country that refuse a sale, but at Seahorse Aquariums “we refuse more fish than we sell, as we need to see their tank and establish whether it is a suitable environment”, says managing director Kealan Doyle.

Doyle has a staff of 24, including breeders, marine biologists and cabinet makers mulling about the warren of rooms at the base in Ballymount. But life hasn’t been plain sailing.

After training as a marine biologist, with a post in Timbuctoo near the River Niger, he contracted typhoid and his appendix burst. His weight dropped to just over five stone – near fatal for his six foot frame, and was tended to by a nun who nursed him back to health.

Next on the agenda was a three-year stint in the Galapagos Islands to study seahorses, which became his lifelong passion, and after his return, he established a seahorse conservation programme in Connemara, the first of its kind in the world.

Investors were attracted after Doyle won the 2003 National Enterprise Award, and with a fund of €3.5 million, the future looked rosy. But the recession hit, investors vanished and Doyle ended up in a small room in Ballymount Industrial Estate, where he started an aquarium business.

“It was really tough as I slept on the floor of this industrial unit every weeknight for two years, while my wife and daughter were in Connemara”

But as the saying goes you can’t keep a good man down, and this year Doyle bagged the Practical Fishkeeping award in all seven categories, the first win for an Irish company in a competition which has run for 40 years and attracts 10,000 entrants annually.

With over 100,000 species of marine life from corals, aquatic plants and fish available, Doyle specialises in what he describes as aqua landscaping – creating an environment that mimics the natural habitat for the many species he supplies.

Light is important and the lighting systems mimic the cloud cover and rainfall for the array of corals which are thriving in their nursery in the centre. One of the rooms is more akin to a laboratory scene from Breaking Bad, with green liquid in chemical tanks bubbling away. This is the phytoplankton unit where Doyle and his coworkers are growing food for their corals – some of which naturally emit a luminous glow at night.

There is a quarantine room where fish who have come as far away as Lake Malawi rest to become acclimatised to their new environment, all monitored 24 hours a day by high tech equipment connected to the biologists phones.

The selection of fish is mind boggling. There are inhabitants of the functional tanks where species have a specific purpose and need to exist in a symbiotic relationship with other creatures.

“For example the cleaner shrimp is like nature’s hairdresser and needs a particular type of fish to coexist in an environment that mimics his own,” explains Doyle.

Some of the fish are dangerous. John Mica, who specialises in tropical breeding (the company have a nursery in Offaly), “stupidly took my eye off the black piranha when cleaning the plants in his tank” and the piranha duly took off the top of Mica’s finger. The bumblebee mantis shrimp has the most advanced eyes of any creature in the animal kingdom but also has a hammer like structure that can emit the same force of a .22 calibre rifle and break the tank glass if unhappy.

Most interesting is the aquaponics though, whereby a freshwater fish tank coexists with herbs. Waste water acts as a fertilizer for the herbs, which in turn grow four times faster than their soil-only counterparts. A small tank can sustain four herb plants for a family.

The company are in the process of what Doyle describes as his most important project to date – growing fish sustainably to eat at home. This will have a neutral carbon footprint and none of the toxic chemicals associated with fish farming.

The company are involved in two trusts; Ban the Bowl (Doyle equates goldfish bowls to septic tanks) and The Seahorse Trust which won a conservation award in 2004 from the International Seahorse Trust.

A recent study by the University of Exeter found that aquariums help to reduce stress by lowering heart rate and blood pressure.

There has been a sharp increase in business from both the commercial and domestic market for saltwater tanks filled with natural corals, plants and tropical fish. “But you have to mindful of their environment: take the clown fish (which children will know as Nemo from the same titled film) he never leaves the area around his anemone – that is his home, so you have to have sea anemones if you have clownfish”. Equally the black piranha prefer to reside alone.

Doyle has just installed his 16th tank into Temple Street Hospital, and other commercial units are in line for Dundrum Shopping Centre and Dublin Airport.

“When it comes to residential tanks what I love to hear from our customers is ‘the kids are not watching as much television’ – it is a great way to get kids away from the screens – especially at night when the corals are fluorescent”.

Aquariums cost from €100-€100,000 depending on size, and the company provides a full maintenance service to check fish health, water quality and cleaning if necessary.

Meanwhile, Doyle who is known to his peers as Seahorse Man, spends his free time with his family breeding goats, alpacas, chickens and bees in the Dublin Mountains.