Be dazzled: summer jewels you have to try at Adam’s 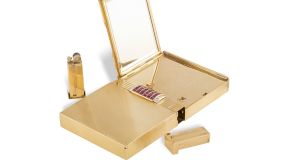 There is a great sense of summer and echoes of La Dolce Vita – the 1960 Fellini film capturing exotic European glamour, in the forthcoming Adam’s Fine Jewellery and Watches sale, which will take place on May 14th at their auction house on St Stephen’s Green.

Lot 52 is a set of “coffee bean” gold and diamond ear-clips with matching brooch by Cartier from 1955. They once graced the cover of French Vogue magazine, which recommended them for beachwear and sports, though with the length of the earrings you’d wonder what type of sports they had in mind in the 1950s (€6,000-€8,000).

Equally, posing on a beach would be about the height of exercise that lot 97, a pair of chandelier emerald and diamond earrings, would tolerate (€8,000-€10,000) while lot 218, a pair of green and purple amethyst pendant earrings with diamond surmount, are as glamorous - but a more affordable option at €600-€800.

Bright and playful animal pieces also feature: lot 73 is a turquoise, coral and diamond butterfly brooch (€1,200-€1,800) and a diamond and carved amethyst ring with matching earrings in the shape of a duck is lots of fun for anyone in search of a chunky colourful ring and earring set (lot 70 - €4,500-€5,500).

Highlights of the sale include important and interesting pieces by some of the world’s most notable jewellery houses such as lot 39 Van Cleef & Arpels diamond and ruby minaudiere from 1935, €15,000 - €20,000.

Throughout the roaring 20s, evening bags and small vanity cases became the ultimate accessory for soirees and nights on the town. One afternoon in the 1930s, Florence Jay Gould - the legendary American socialite, described in Susan Ronald’s book A Dangerous Woman as “a seductive and utterly amoral woman” - visited her favourite jeweller, Van Cleef and Arpels.

When Charles Arpels discovered she was carrying her lipstick and lighter in her box of Lucky Strike cigarettes, he came up with the idea of a minaudiere; a compact jewel encrusted box with clever compartments for Gould – who the book claims was a serial adulteress, art patron and Nazi collaborator.

This diamond and ruby-set minaudiere dating from 1935, has three compartments and a mirror set in 18k gold. “It is a collector or museum piece due to its exceptional quality - and in those days, creations were often inspired by practicality,” according to Claire-Laurence Mestrallet – head of jewellery and watches at Adams.

Though the lipstick case is tiny and will only take a custom made balm, this box bag makes for an utterly unique evening purse.

Considered to be the greatest poet in Russian history and creator of the modern Russian language, Alexander Pushkin, who spent years in exile, has been immortalised in many ways since his death in 1837.

The second largest diamond ever discovered in the former USSR bears his name, as do Pushkin Lake and Hills in Canada. In 1999, to mark the 200th anniversary of his birth, Swiss luxury jeweller Chopard created the Pushkin bracelet watch – an 18k white gold lattice bracelet, with pave set diamonds and cultured pearls.

Though you would really wear it as a bracelet rather than a timepiece, what makes this watch special is that only three were ever produced. These watches had a price tag of €95,000 when they were sold by Chopard in Geneva in 2000. The estimate for this piece, accompanied with a certificate of authenticity, and one of the highlights of the Adam’s sale is €20,000 - €25,000.

Over the years since its establishment in France in 1780, the Chaumet house has been intrinsically linked to French history, most notably as the official jeweller to Napoleon Bonaparte.

The house gained prominence in tiara territory when the Empress Joséphine commissioned hers from Chaumet and soon all nobility followed suit. The company now produces just 10 tiaras per annum, as demand has dwindled and costs can run into the millions, but many of the tiaras have removable pieces that are also worn as brooches.

This Chaumet brooch has been handed down through two generations since it was purchased by an Irish family in Paris in 1955. “It’s the quality that is really important with this piece - not just the settings, as the diamonds are so clear and white” says Mestrallet of the platinum spray - set with a central 1.4ct diamond and a further 8cts, which comes with its original case (€8,000-€12,000). See adams.ie

Maureen Gaffney: Why and how do we fall in love?

Could artificial sperm mean the end of men?