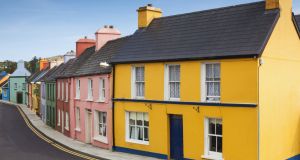 What do you see when you see rows of brightly coloured houses, or strips of sherbet buildings? A postcard-perfect village? Evidence of a community working together to create a pretty neighbourhood? A clever tourist attraction? A townscape that’s fresh and modern?

Ireland has no shortage of charming small towns, though some are arguably more picturesque than others. The village of Eyeries in Cork boasts a strip of eye-catching coloured houses, while Clifden’s main drag features buildings of sherbet orange, yellow and pink. Sneem, Kinsale and Roundstone are equally photogenic.

Down in Callan, Co Kilkenny, Bridge Street had once been a street locals used to get to somewhere else. “It was described as ‘creepy’, ‘frightening’ and ‘dead’,” recalls Etaoin Holohan, who lives in and owns Fennelly’s coffee shop and artists’ space on the street.

“Businesses were closing or being left behind.” Now, with its yellow, green blue, red and pink buildings, it’s the vivid centrepiece of the town and breathing life into the street was a team effort among locals.

Fennelly’s itself is an aqua blue: a favoured shade of Holohan’s, but also one picked from the town’s original colour palette. One side of the street reflects onto the other, “to represent conversation and exchange”.

Holohan observes that many ailing small towns in Ireland could take a leaf out of Callan’s book.

“They are undervalued right now, but we are free to redefine what the centres of our towns are,” she says.

“If you want to have a brightly coloured house, snap up an old building in the centre of a small town and do what you like it. There’s greater freedom in a town.”

While bright colours appear to be a fixture in small towns, particularly in the west and south of Ireland, in urban centres and suburbs colour choices tend to be more conservative.

“White is still a big seller, but after that colours in light grey and taupey colours sell well (in Dublin),” observes Dylan Neary, general manager of Stillorgan Decor, a large scale paint and decor outlet.

“Terracotta and sunflower yellow were once popular, but they’ve now gone off the (swatch) card. Talk to someone in the west coast and bright creams and yellows are popular. Round here, a lot of people are tied into colour schemes within housing estates so the houses are done in magnolia or ivory. We are noticing that colours like soft green are becoming more popular with exteriors, but I’d say people round here are not quite so adventurous.”

There are a few outliers in that regard: when German-born artist Nina Stammerjohann moved into her 70s build house in Glasnevin, Co Dublin, she painted her front door a brilliant orange; a nod to the house’s origins.

“I love bright colours and we felt we had to integrate something that suited the era,” she notes. “We spoke with the neighbours about it recently and while once upon a time it was standing out, you get used to it and we don’t even see the orange. When we have parents come to the house to pick up their kids, they’ll often say, ‘you have so much colour in your rooms!’”

A colourful exterior is an immediate calling card that reflects creativity and personality, although there is reason to believe that dark grey is set to become the most modish shade of them all. A staple neutral in Irish interiors in recent years, greyscale concrete finishes is commonplace amid the new wave of trendy urban coffee shops and restaurants. It’s a trend that homeowners have evidently picked up on.

Currently on the market is an ultramodern showstopper at Landenstown in Sallins, Kildare (for €745,000 via DNG McCormack Properties in Clane). The property featured in RTÉ’s Home of the Year in 2015, and has been included in a list of the best contemporary homes in Ireland in design bible Dezeen.

“Grey came in with the recession, when a lot of design became very utilitarian and industrial,” explains Dundalk-based architect Emmet Holland, who recently finished work on a stunning new build in Louth. The project’s exterior – walls, windows, roofing - is dark grey, leading to a solid mass that stands out well against the open rural landscape.

“This was the darkest shade of grey that (suppliers) advised, for technical reasons,” says Holland. “Any darker, and it would have absorbed too much heat from the sun, and it would expand too much and crack.

“It’s a little bit like an agricultural building, so it blends well with the landscape,” observes Holland. “It looks particularly great amid all the green – it’s quite earthy.”

Holland himself has fallen for the grey trend in his own interior: “Grey for internal design follows fashion a lot. You wouldn’t suggest painting anything magnolia right now, and similarly, grey will eventually fall out of fashion. We had a room in our own house painted grey and for a while people thought it was unusual. But grey is a great neutral to use, as essentially it’s colourless.”

Holland is clearly proud of the durable and contemporary finish of his latest project. As to whether, in a wider sense, grey exteriors could usurp the pastels and sherbet shades beloved of so many others, Holland admits that the jury is out for now.

“Every building outside my office window is painted grey, so it’s definitely making its way outdoors in Dundalk at least,” he smiles. “As a view though, it mightn’t be ideal.”