Rambling Dundrum Georgian steeped in history – and art – for €1.95m

Woodlawn House, located beside the Luas was lived in by a colonel, a confectioner and former president of Ireland Erskine Childers 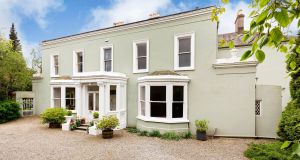 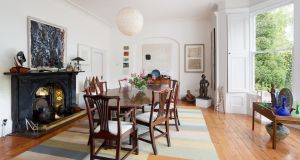 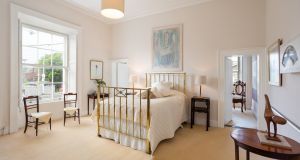 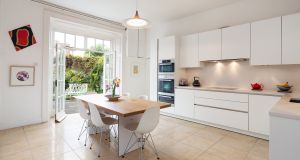 Despite standing for 220 years, there is very little in State or online records about Woodlawn House in Dublin 14.

Old photographs of the house show rows of haystacks piled high in open fields, alongside what is now the busy Churchtown Road.

The late-Georgian property was constructed in 1799 as a farmhouse on 200 acres of lands which at one stage would have taken in much of Dundrum. To put the age of this property in perspective – it was constructed just after the foundation stone for the Four Courts was laid.

Built for Col Montmorency, who purchased the lands from the Protestant archbishop of Dublin, the house has been home to quite a list of illustrious residents over the years.

The house was also occupied by members of the Corbet family – relations of WB Yeats, and indeed his sisters Lily and Lolly lived just up the road at Gurteen Dhas. Across the road in St Nahi’s Church, embroideries of the Last Supper by the Yeats sisters – who are interred there – still remain, as do the beautiful stained-glass windows by artist Evie Hone.

The current owners of Woodlawn House purchased the property in 1998 – there had been planning permission to demolish it and erect two houses in its place – in the manner of The Oaks development, which is built on the original grounds of the house.

But in appreciation for its heritage the house was saved – and since 1990 it has been a listed structure.

Though dating from 1799, there were two additions to the property in the 1840s, most notably the front porch and a small curved glass conservatory attributed to Richard Turner – considered to be one of the most important glasshouse designers. Turner’s other works include the Palm House at Kew Gardens and the curvilinear range at the National Botanic Gardens in Glasnevin.

The late gold-medal architects Peter and Mary Doyle, were engaged to upgrade the property which they did, but very little of the original fabric has changed since the 1800s, with the exception of a full door to replace a service hatch from the kitchen to the dining room, and French windows now replace what were windows overlooking the kitchen garden.

In typical Georgian form, the rooms are beautifully proportioned; the only tell-tale that this property – extending to 384sq m (4,130sq ft) – was once a farm house, is the curved archway in the dining room, as this aperture, now filled in, once opened into the old milking parlour.

It is really more relaxed elegance than formality at Woodlawn House, with large open fires, wide bay windows and simple coving – with the exception of the detailed cornice in the hallway. The entire house has a neutral palette, as the current owners are modern art aficionados and their collection sits comfortably against the neutral backdrop.

The kitchen too was kept simple to allow colourful artworks to take precedence.

The property has six bedrooms, the principal is en suite with a large dressing room. Two of the bedrooms are interlinked, so would easily facilitate a second en suite without interfering with the fabric of the house.

Of interest is Woman Jumping into the Bath, a hand-painted glaze on the tiles in the family bathroom by the late artist Barrie Cooke, whose abstract impressionist work also features in the Irish Museum of Modern Art and the Stedelijk Museum in Amsterdam.

The gardens which extend to a third of an acre, wrap around two sides of the property, and are set in different themes, all neatly framed by clipped box hedging. Currently colour is provided by a graceful two-tone cherry blossom, and an array of tulips and camellias.

The property is in turn-key condition – with the exception of the conservatory which needs some attention – and is located behind high walls along Upper Churchtown Road, very close to the Luas stop at Dundrum. The boundary acts as an effective sound barrier along with the mature plantings in the gardens.

Woodlawn House is a very fine country home in the middle of Dublin 14 (the photographs fail to capture its real charm) and it is on the market through Lisney for €1.95 million.