Heaney collection and some rare whiskey in Co Cavan sale 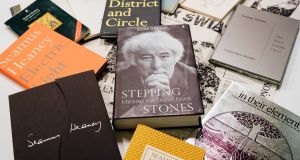 A selection of 50 rare and signed works by 1995 Nobel Literature laureate Seamus Heaney will be offered at the Victor Mee auction.

Victor Mee’s forthcoming Irish Connections two-day sale, on May 8th and 9th, at its Belturbet, Co Cavan salerooms will offer some unique pieces of Irish history.

The top listed item is lot 300, a 1917 edition of the Irish Proclamation. Only three of these are known to have survived and they were printed for the first anniversary of the 1916 Easter Rising.

These proclamations were printed by Cumann na mBan, the nationalist women’s organisation, with the original printing blocks used for the 1916 document, as the blocks had been salvaged after the wreckage of the GPO. They differ slightly from the 1916 version – most notably in the misspelling of Éamonn Ceannt’s name – it is spelt Eannon.

Two Belleek busts of Michael Collins and Arthur Griffith are also listed, and each have an estimate of €250–€400.

Also included are 50 books, some rare and signed, by the late Irish poet and playwright Seamus Heaney – recipient of the 1995 Nobel Prize for Literature. The Door Stands Open – Czeslaw Milosz 1911-2004. (Signed and Lined Limited Deluxe Edition with The Original Prospectus) by Seamus Heaney Irish Writers’ Centre, Dublin, and Book Art Museum, Lodz – is listed with an estimate of €1,250–€1,850.

Three rare bottles of Irish whiskey also form part of the two-day sale; lot 1022 is a 1940s bottle of John Jameson and Sons bottled by Doheny and Nesbitt, bearing the rather humorous banner “not a drop is sold till it’s seven years old” – considering the bottle is almost 80 years old (€6,000–€12,000).

In keeping with Irish connections and collections, Ireland’s oldest painting club – The Dublin Painting and Sketching Club which was founded in 1874 and held its first exhibition in the horse riding school to the rear of Trinity College – will host its 141st annual exhibition at the CHQ building on Custom House Quay from April 29th until May 12th.

Over the years some of Ireland’s most accomplished painters have been members of the club – including John Butler Yeats, Walter Osborne and Nathaniel Hone.

This year’s theme is The Port – to reflect the club’s new home, and while some of the works indeed depict Dublin Port and the Liffey, the array of 170 works by over 90 artists also feature landscapes, still life and streetscapes. Prices for the works vary from €250–€4,000, with the majority of the works (60 per cent) in the €750–€1,000 range. See dublinpaintingandsketchingclub.ie