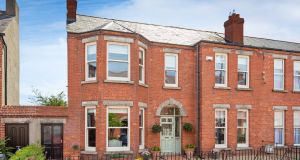 Number 42 Hannaville Park, Terenure: The front garden is gravelled over but there’s plenty of scope for lovely planting as is clear from other gardens on the street. 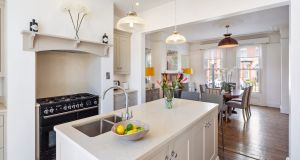 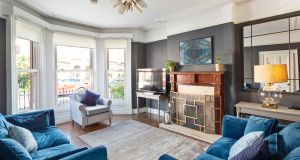 Having had only two owners since it was built in 1910 number 42 Hannaville Park had a major makeover when it last changed hands in 2012. What those owners did with the double-fronted red brick on the popular Terenure Road neatly ticks the wish list of most families moving into these type of period houses.

There’s now an open-plan kitchen and dining area, fitted with a very stylish bespoke painted timber kitchen, a family room opening out to the back garden, a downstairs shower room – all renovation must-haves that still work well with the house’s many original features. The front living room with its wide bay window, ceiling rose, feature fireplace and timber plank flooring reflects the home’s Edwardian origins.

It has four bedrooms – again ticking that family wish list – though one is a small single which might encourage new owners to explore the possibility of going up into the attic and using that single room to provide an en suite for the main bedroom.

Two storeyed, the floor area covers 185sq m (1,993 sq ft) and the double-fronted layout with rooms off either side of the bright hall gives a sense of spaciousness. While considerable work was done in that 2012 makeover including a new roof and new windows, the Ber rating is a chilly D1 – something new owners will probably try to address.

The front garden is gravelled over but there’s plenty of scope for lovely planting as is clear from other gardens on the street. The rear garden was professionally landscaped and there is a covered side passage. Parking is on street on the one-way street.

Green-fingered garden is to dye for
4