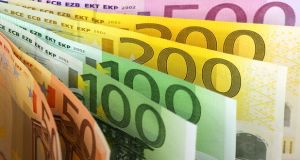 Prior to last week Nama had set a lifetime surplus goal of €3.5bn.

The National Asset Management Agency (Nama), which last week upgraded its lifetime profit forecast to €4 billion, is on track to beat that new projection by €600 million by the time it is wound downin 2021, according to Investec Ireland economist Philip O’Sullivan.

Mr O’Sullivan, who has consistently raised his estimates in recent years ahead of Nama increasing its own projections, noted that the agency had retained earnings of €4.25 billion on its books at the end of last year, and would actually have to lose money over the next two years to meet its latest target.

Prior to last week it had set a lifetime surplus goal of €3.5 billion.

“While the outlook for the global economy – and, by extension, the highly globalised Irish economy – has deteriorated in recent quarters, it remains positive, and we think it fanciful to assume that Nama will lose €250 million between now and its wind-up date,” Mr O’Sullivan said.

Nama paid five lenders a discounted price of €32 billion for €74 billion of toxic commercial property loans between 2010 and 2011, representing a 57 per cent discount to their original value.

The price paid – by way of senior and junior government bonds – was €5.6 billion above the loans’ market value at the time, but reflected what Nama assessed as the so-called long-term economic value of the portfolio.

The agency, which at one stage projected that it would only make enough money to make good on the €30.2 billion of senior debt used to buy the loans, has upgraded its forecasts on a number of occasions in the past five years.

“While it has become fashionable in some quarters to claim that the bar was set low for Nama and that it paid ‘cents on the euro’ for ‘good assets’, it is worth remembering some of the apocalyptic forecasts that greeted news of its establishment,” said Mr O’Sullivan. “Back then third-party estimates of lifetime losses stretched to as high as €20 billion.”

Nama’s outgoing chairman, Frank Daly, said last Thursday as Nama reported full-year results that the agency would transfer an initial €2 billion to the exchequer in 2020, and the remaining €2 billion the following year.

Mr Daly said the agency had to repay its remaining €1 billion of subordinated debt and approximately €56 million to private investors before it could pay the State its dividend.

The private investors own the majority of a special-purpose company sitting at the top of Nama’s corporate structure which was designed to keep the agency off the State’s balance sheet during the crisis.

Nama reported an after-tax profit of €785 million for 2018, its eighth consecutive year of profitability, and a 65 per cent increase on the previous year.