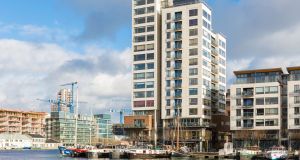 Millenium Tower in Dublin’s Docklands where an attractive two-bedroom, one-bathroom corner unit on the 10th floor is now available.

One direct consequence here of the coronavirus crisis and subsequent global lockdown has been a flight of rental stock from the short-let market to longer lease use. Dublin areas where previously there had been rental stock shortages have registered big jumps in numbers, in particular in the city centre, while outside Dublin the larger cities have also shown increases.

Last week property website and specialist in rental properties, Daft.ie, reported an 83 per cent jump in one- and two-bed apartments in Dublin 1, 2, 7 and 8 compared with the first 24 days in March 2019 pushing the number of units available to rent in these areas to a five year high.

This spike has been noted within Sherry FitzGerald’s lettings department where they have seen a 68 per cent jump in stock levels listed as available for monthly rent in the two-week period from March 5th to March 25th this year, according to managing director Eileen Sheehy. The new stock comprises apartments in the main.

Galway has seen the biggest regional rise in rental units coming to the market, posting an increase of 40 per cent on the same two-week period last year. Gráinne Ferry is an owner of one such property, a four-bed located on Father Griffin Road in Salthill, Galway city’s cool inner coastal suburb. It was her family’s home since 2000 and for the last two years she rented the 1930s property on the Airbnb platform for an average of €277 per night in high season, with the bookings filled each summer. The market has collapsed, she says. “Overnight it just crashed.” But with a mortgage to pay she has just listed it on Daft where it is now seeking €2,750 per calendar month.

The increase in stock levels is good news for renters. In certain parts of Dublin, including Ballsbridge and Docklands, where there is a lot of comparable stock, the increase means that tenants are now negotiating rental reductions and offering less for a longer tenancy agreement in units priced within the €2,000 to €3,000 price range. “For an apartment seeking €2,500 they’re offering €2,300,” Sheehy says.

Another rental property stream is coming from vendors who are hoping to sell but whose properties are not finding buyers as quickly as they’d hoped. Now they are opting to list these properties for rent. It’s easy to spot former short lets newly arrive on the online property platforms; giveaway signs in the promotional photos advertising the units include Instagram-friendly colour-blocking on feature walls, metro tiles everywhere and rolled up towels positioned at 45 degree angles on the end of beds. Would-be buyers may even recognise properties that they have viewed as now being for rent. Take one three-bed duplex in Dublin’s south dock quarter, for example, which was on the market seeking €525,000 but is now available to rent for €3,450 per calendar month for a minimum one-year period.

In Docklands there were 151 properties listed to rent on Daft last Friday. Some of these appear to be available on an extended short-let basis. It’s a supply-and-demand dynamic, says agent Owen Reilly who has several lettings in the area. “For the first time in a number of years tenants do have choice. It is, temporarily, a tenant’s market.”

A two-bedroom, two-bathroom unit at Gallery Quay is available through Dial a Short Let from July 13th for a minimum of three-months at €4,900 per calendar month . A similar sized property, but on the top floor and listed as Spacious Grand Canal V1 on the platform Sweet Inn, is available for a 15-night duration from May 15th to 30th inclusive for €4,053.

Others in the tech quarter seem to be covering all options and making themselves available for short- and long-term rent. For example a nicely appointed two-bed, two-bath, ground-floor apartment at Dock Mill on Barrow Street, where Google’s HQ is, was listed last week seeking €2,750 per month on Daft. The same unit, which states it has six beds, is available on Airbnb from May 29th to May 31st, for a two-night stay at €379 per night for one guest, and for €449 per night for six guests (a total of €1,154 when additional cleaning and service fees are included).

A two-bedroom, one-bathroom corner unit on the 10th floor of the Millennium Tower had previously rented on a corporate short-let basis commanding between €3,500 and €4,000 per calendar month. It is now being rented on a long-term basis for a somewhat reduced €2,800 per calendar month. When it was a corporate let the unit, which has southwesterly views across Dublin bay to Dún Laoghaire, came with free utilities, wifi and cable TV. These extras are not included in the one-year lease.

This luxury lodge in Tinakilly, outside Rathnew in Co Wicklow is a granite-fronted residence built by developer Steven Van Den Berg that extends to over 7,000sq ft. Originally a coach house for Tinakilly House it boasts a screening room, bar and extensive, private grounds. Its amenities have made it very appealing to the celebrity short-let market and well-known faces who have called it home include comedian turned actor Russell Brand and musician Ed Sheeran.

It is available to short- and long-term rent. The former costs €7,900 on a weekly basis. You can view it on MyHome and Daft where a 12-month long-term lease is quoting €12,500 per calander month. This includes a full concierge service that will take care of shopping, arrange caterers to serve meals, housekeeping and covers all bills. All lettings are arranged through through Five Star.

In Salthill, 12 Father Griffin Road is a charmingly decorated 1930s house. The four-bed has its living room and kitchen on the first floor along with one of its double bedrooms. There are two more gorgeous bedrooms tucked under the eaves; the double is painted in marine blues and whites while the single is a sea green. Both feature tongue and groove panelling. When on the Airbnb platform the property rented for an average of €277 per night during the summer season. It is now listed on Daft where it is asking €2,750 per calander month. The house is located 850m from Quay Street and just a 10-minute walk to the prom and Galway Bay.

rent on booking.combut is also offering a long-term rental on platforms MyHome and Daft. On booking.com a two-night mid-week stay from Wednesday, April 29th to Friday May 1st is priced at €588 for two people. Meanwhile on MyHome the smart townhouse, with its eye-catching teal-painted living room, is seeking €2,600 per calendar month with a lease of one year.

A smartly appointed two-bedroom, two-bathroom apartment opposite Trinity College is listed on Daft as seeking €3,000 per month (up €500 with no minimum lease) while a similarly located two-bedroom property is asking €294 for a two-night stay through City Breaks on booking.com.

Apartment number 2 is a one-bed unit that sold in December 2018 for €335,000. It is now listed on rent.ie from €350 per week, down €87 per week and bucks the trend of monthly rents being lower priced than short

lets. This unit is listed as being only available until December with a maximum lease of eight months and a monthly rent of €1,900 per calendar month for an eight-month lease.

Within the Baggot Street Lower area there is a fully furnished two-bedroom, two-bathroom apartment listed on Daft asking €2,500 monthly with a minimum lease of one year through adoor.ie. A comparable property, listed as accommodating for up to 10 people (but available to rent for just two persons) for two nights, Friday, May 1st to Sunday May 3rd, for €1,733 is listed on hiphipstaythrough booking.com.