Sweet €395K North Strand terrace with that rarity – a garden 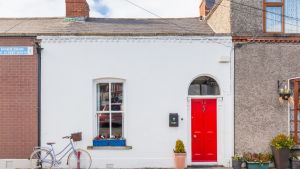 Spencer Street North is a quiet little road that runs parallel to busy North Strand but feels a million miles removed from its frenetic bus and car traffic.

Number 15 is a mid-terrace, villa-style property that the current owners have lived in for 15 years but with two bedrooms and three growing children they’re reluctantly looking to trade up.

The property has been well maintained and opens into an impressively high ceilinged hall – a real feature of these homes. The living room to the front has timber floorboards underfoot and an open fire with a cast-iron surround as well as similar ceiling heights. The architraves and doors are all done in a waxed timber finish.

There is a second reception room down a few steps to the rear of the house that is set up as a dining room but can be used as a bedroom in some homes.

The kitchen is located in a single storey extension to the rear of the house which, in its entirety, measures 90sq m/969sq ft. It has waxed-timber units and there is access from here out to the garden. The main bathroom is off the kitchen.

The house is notable for its decent-sized garden, a rarity in this part of Dublin 3 where many of the surrounding homes just have small serviceable back yards. While having a northwest-facing aspect, it gets morning and evening sun, because the surrounding properties are all low rise.

There are two bedrooms on the first floor. Both are smallish measuring 7sq m and 5.8sq m respectively and serviced by an internal guest toilet. The main bathroom is still downstairs in many of the surrounding houses.

Overall this is a deceptively spacious house but there would be scope for the accommodation layout upstairs to be reimagined by putting one of the bedrooms downstairs, where the dining room is located, and installing a second full bathroom upstairs. This would work especially well for any buyers who might want to avail of the rent-a-room scheme.

The property has a deceptively large and light-filled attic room that provides a further 22sq m of space. It is accessed via a narrow stairs, the ceiling height here at its apex is almost 2.1m and the room is set over several stepped levels. You can see Croke Park in the distance. A teenager would love this as an escape. It would also work really well as a home office as it offers a strong disconnect from the main house.

Another boon is that, unlike many of the surrounding streets in this pretty, mainly red-brick enclave, Spencer Street North doesn’t have a railway line running directly behind it. It is one block up from the Dart and one block over from the Maynooth commuter line. You can hear and see the Dart but they’re not oppressively close.

The property is seeking €395,000 through agent Lisney.