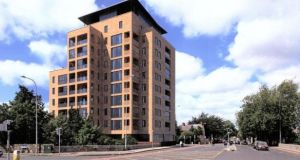 Plans to convert a landmark office building in Donnybrook, Dublin, into a controversial high-rise apartment block have been rejected by Bord Pleanála.

The board has upheld the decision of Dublin City Council to refuse planning permission for the demolition of Jefferson House – a five-storey office block on the banks of the river Dodder – to allow for the development of an 11-storey building containing 62 apartments.

Rejecting the appeal by development company Silver Bloom, which is owned by Hong Kong-based businessman Fergus Lynch, the board said the project would constitute over-development of the site “by reason of its height, scale and massing”.

The board said the proposed development, if allowed, would result in “an unacceptable negative visual impact on this prominent site within a designated conservation area”.

It also concluded that the apartment block would seriously injure the residential amenity of other properties in the area around the junction of Donnybrook Road and Eglinton Road because of its overbearing impact.

The board said it was likely to depreciate the value of other properties in the vicinity.

It also claimed the design of the apartment block meant there was a significant portion of single aspect northwest-facing units which it considered inadequate for future occupants.

Planners with Dublin City Council had also noted that the existing office block was a “non-conforming use” as the area was zoned for residential development.

The existing Jefferson House has been described by a number of local councillors as one of the ugliest buildings in south Dublin.

Silver Bloom claimed Jefferson House, which was built in 1981, was of poor quality design, and justified its demolition on the basis it was “an obsolete and unattractive building” that was no longer fit for purpose.

A large number of local residents also opposed the project amid concerns that the area is being transformed by a number of large developments, including a seven-storey apartment block containing 94 apartments directly across the road from Jefferson House, which was approved by Bord Pleanála last year.