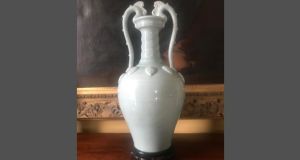 Auctioneer Philip Sheppard was at pains to point out that the vase was not part of the contents of dancer and artist Michael Flatley’s home, but rather an additional lot

A 300-year-old vase which made its way from the Chinese mainland to the Irish midlands in circumstances shrouded in mystery is on its way back east after selling for a record-breaking price of €1.2 million at an auction in Co Laois.

The price paid for the 54cm celadon jade vase – which dates back to Yongzheng, the fifth emperor of the Qing dynasty, who ruled China from 1722 to 1735 – was 1,000 times more than its list price and a record at a public Irish art auction.

Although it went on the market priced at between €800 and €1,200, auctioneer Philip Sheppard of Sheppard’s Irish Auction House in Durrow told The Irish Times it was an intentionally low price and that both the auction house and seller knew the vase would likely sell for considerably more.

They did not, however, anticipate just how many multiples of the price it would realise.

“When it came to us for valuation, both we and the vendor knew it was a significant piece,” he said. “But we decided to put a conservative value on it and to describe it very conservatively.”

The way the vase was described on the auction site pre-sale could scarcely have been less dramatic.

“Lot 662, Chinese celadon vase of amphora form decorated with scroll handles, seal mark to base,” was all it said. Bland as it was, it was enough to pique the interest of high rollers on the international vase market.

When pricing lot number 662, Shepherd’s team would no doubt have been informed by a sale in a Hampshire auction house in September 2019 when a porcelain vase from the same period was listed at a price of between £445 and £667 before selling for £1.45 million.

Mr Sheppard knew the behind-the-scenes work had paid off when he saw a “serious level of interest” in Lot number 662 and many reserving telephone bidding slots as the auction date neared.

The bidding started shortly before 1pm on Friday at just €500, but within minutes a flurry of bids from online and telephone bidders saw it rise to more than €100,000. Less than 10 minutes after the auction started there were just two bidders left, one online and one on the telephone.

The phone bidder, based in Taiwan, won out.

“We have been dealing with the Taiwanese collector for many years,” Mr Sheppard said. He would not divulge the seller’s name or how they had come by the precious vase but did say the person was “speechless” after the sale.

The auction was part of the Castlehyde two-day sale, but Mr Sheppard was at pains to point out it was not part of the contents of dancer and artist Michael Flatley’s home, but rather an additional lot.

The standard buyer’s premium of 25 per cent (which includes VAT) on the hammer price will add a further €300,000 to the price paid. This, combined with a seller’s premium of 10 per cent (€120,000) will mean a tidy sum for the Durrow-based auction house.

As to how Ireland’s priciest vase will travel to its new home, Mr Sheppard said that in times past it was not uncommon for buyers to fly to Ireland so they could bring their newly acquired possession home. However, in the era of Covid-19 the vase will most likely be shipped to its buyer in the days ahead.