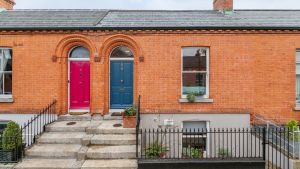 The area around St Alban’s Road in Dublin 8 has seen a remarkable gentrification in the past eight years. This is best reflected in the way property prices there have risen since 2011 when you could pick up a doer-upper on the road for €250,000-€400,000, depending on size.

It was bought by the current owners, Jean and Jonathan Hanley, in 2006. “It was in a state of disrepair as it had been rented out for years and took six months to fully renovate,” recalls Jean.

The couple engaged Lisa McVeigh of award-winning architectural firm DMVF to create a new room to the rear of the ground floor. “She did a remarkable job, as at the time a double extension was not the norm. What we ended up with was this large bright room full of natural light, which did not block any light in either of our neighbour’s homes. The ceiling [which has roof lights] brings lots of light in, but is done in such a clever way that water cannot lodge up there.”

During the rebuild, the Victorian features were removed in order to protect them and, to the couple’s surprise, they discovered that the ceilings at hall level were much taller than they initially thought.

“We discovered that the previous owner – who was a landlord – had put in fake ceilings to attract renters by lower heating bills, and when we took them away we found that they are over 13ft in height.”

The family are moving to be closer to their children’s schools in Dublin 6. The house is well located within easy reach of the city centre, and there is a selection of great local eateries on the doorstep, a great butcher at Leonard’s Corner and fresh sourdough bread available on tap from nearby Gaillot et Grey.

A major selling point though is the property’s large extension at garden level. Sometimes these villa-style houses can feel a little disjointed, but here the huge bright space at garden level really compensates for having just one formal room upstairs.

The garden itself is also a selling point, as it is larger than many of its neighbours and has colour from March to October with olive trees framed against borders of white mop head hydrangea and an abundance of roses.