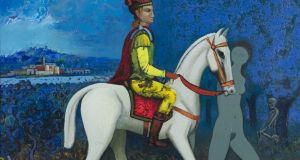 This year marks the 100th anniversary of the birth of Irish artist Daniel O’Neill (1920-1974) who was born in Belfast. To celebrate, two events were planned: a retrospective exhibition that was due to open at the Office of Public Work’s gallery in Farmleigh in Phoenix Park; and the publication of the first monograph dedicated to the artist, written by art historian Karen Reihill, who also curated the exhibition.

Despite the exhibition being postponed twice due to Covid-19 restrictions, Reihill remains determined to mark O’Neill’s centenary, and so has decided to proceed on Monday, November 23rd, with the publication of Daniel O’Neill: Romanticism & Friendship.

The largely self-taught artist began by experimenting with watercolours at the age of 15. He educated himself in art history, researching the Renaissance through books in his local library. After training as an electrical engineer, he was discovered by gallerist Victor Waddington and held his first solo exhibition in 1946 to great success.

Adam’s of St Stephen’s Green’s forthcoming Important Irish Art sale on December 9th will feature five works by the modernist painter, with Horseman, Pass By (lot 23, €20,000-€30,000) one of the standouts. The bold, colourful piece, which is a departure from O’Neill’s more sombre works from the 1950s, is said to read as a lament on morality, and was lauded by the Irish Press for its “atmosphere and mystery” in 1971. (The title is borrowed from the WB Yeats poem Under Ben Bulben, the lines of which are now immortalised in Yeats’s epitaph.)

Reihill’s book is available to purchase from local bookshops and Kenny’s of Galway online bookshop and will be available through de Veres and Adam’s when their salesrooms reopen to the public, priced at €25.

The top lot in Adam’s sale, which features a wide variety of works from the early 19th century to the present day, is Sleep by Falling Water by Jack B Yeats (€150,000-€200,000). Painted in 1948, when Yeats was 77, the work  has been requested by the National Gallery of Ireland to be loaned as part of a prestigious exhibition next September to mark the 150th anniversary of  Yeats’s birth in 1871.

The Rake Crossing Sligo Bridge, a watercolour also by Yeats, is now appearing for the first time on the market. Listed at €25,000-€35,000, the painting was given by the artist to Rev TA Harvey, the rector at Lissadell and has been retained by the family until now.