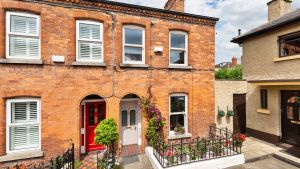 It’s not surprising – given its location and walk-in condition – that just one week on the market and 6 Brighton Avenue in Clontarf, Dublin 3 has seen strong numbers at viewings.

Open views have been banned since March but by-appointment slots are still allowed during Level 5 and are taking place in a limited way; carefully monitored by agents operating under tight, industry agreed protocols. Viewers at this two-bed 75sq m (807sq ft) redbrick in Clontarf are mostly first-time buyers.

There are several Brighton Avenues in Dublin, including one in Foxrock and one in Rathgar – this northside one is a neat cul-de-sac and the owners of number 6 bought just a few years ago (paying €450,000) when the property was in good condition, requiring mostly cosmetic redecoration to the young couple’s taste. It stands at the end of a terrace of three similar houses.

But the owners did considerably more than open a few litres of paint. They laid new floors – attractive patterned tiles in the hall, solid limed oak herringbone parquet in the open plan living and dining rooms and they replaced the three front windows with sash versions, similar to the type that would have originally been there.

Wood panelling, halfway up the walls in the hall and landing and painted a crisp white, creates a warm welcoming look and the owners continued this style into the refurbished bathroom in the first floor return where the dark-painted panelling complements the traditional-style fittings which include a free standing claw foot bath.

There are two double bedrooms, one runs across the front with fitted wardrobes, the rear one retains its exposed brick chimney breast and a cast iron fireplace.

The kitchen in the return is galley-style and it opens into a utility room and then on to the split-level west-facing rear garden which has had a significant makeover. Hard landscaping has given it raised beds, new fencing, stone steps, a patio with a smart seating area and an Astroturf lawn.

There is pedestrian access to a lane to the rear and parking is on street. Number 6 Brighton Avenue is for sale through Lisney seeking €495,000.