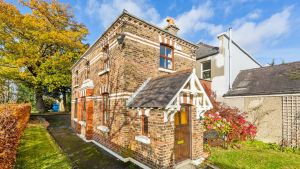 Of the original buildings acquired by Park Developments when it was assembling the Milltown site which would then become Mount St Anne’s, the mellow brick old house at the entrance is probably the most modest.

As part of the ambitious development of the Dublin 6 site to include new apartment blocks and streets of townhouses, the vast old convent buildings were converted into apartments and offices. One original building remained untouched – the house, now called the Lodge – and according to the agent the arrangement between Park and the owner allowed her to go on living in the distinctive looking property. More than two decades have passed since then and the Lodge is now on the market, through Lisney seeking €525,000.

Access to the house is two ways – pedestrian via a gate on to Milltown Road and vehicular through the main entrance to Mount St Anne’s where there is parking to the rear of the Lodge. There is a brick entrance porch with a pitched slate roof with timber trim that gives the property a cottagy, country feel – the convent in its heyday had a large working farm so that’s not too much of a stretch. Although the porch may have been a later addition as originally the front door is likely to have been to the side when the property would have presented as double fronted with a reception room situated on either side of the front door.

As it stands it has 84sq m (904sq ft) of floor space. There are three small bedrooms upstairs – two with dual aspect – and downstairs are two reception rooms, a bathroom and a galley kitchen opening to a yard and outhouses.

While it was updated in recent years with central heating, new windows, a bathroom and kitchen there is no doubt that new owners will do considerable work which is likely to include – subject to the appropriate planning permission – extending the property. They might even consider reinstating the location of the original front door – now blocked off with a window to an internal hall. Outside there is a lawn and a fringe of beech hedging denoting the boundary.

In terms of services the property could hardly be better positioned with a bank of shops directly across the road, close to a bus stop and the Luas – Mount St Anne’s has its own gate to the Milltown stop. A popular florist known for its creative window and path displays, is its direct neighbour.

As the house is part of the Mount St Anne’s development, there will be an annual service charge which the agent says is still being worked out but is likely to be modest.