Extended Edwardian with western ties in Foxrock for €3.15m 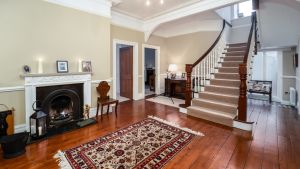 It was the name of the Foxrock house which first caught the eye of the owner who bought it after auction in 1993 for about £390,000 (€495,197): he is from Kinvara, Co Galway, and the Edwardian redbrick on half an acre near Foxrock village was called Kinvara. Then in 2006, a year after selling a business, he and his wife embarked on a major €1.3 million expansion of the already large 279sq m (3,000sq ft) house.

“I needed an office and my wife wanted an art room,” he says. On one side they built a wraparound conservatory that accommodated a studio and a sunroom. On the other side, they added a self-contained wing with a facade that echoes the double-fronted bay-windowed facade of the original house. Architects James A Keaney Associates oversaw the project, which also included reroofing the whole house and installing geothermal heating throughout.

Now the 530sq m (5,700sq ft) detached six-bed is for sale through DNG seeking €3.15 million. A video tour of the property shows that little expense was spared in revamping and fitting out Kinvara, from the wide entrance hall with a fireplace, polished timber floor and cantilevered staircase rising from the middle of the hall to the study with a desk on a raised platform overlooking the front through a wide bay window.

A timber-framed porch typical of Edwardian period homes opens into the front hall. Downstairs accommodation includes a drawing room on one side of the entrance hall and a formal dining room with a polished timber floor and deep green walls on the other. The dual aspect drawing room has a bay window to the front and a rectangular bay at the side; it opens into a family room and from there into the studio and sunroom at the rear of the house.

The dining room opens into the kitchen-breakfast room. The kitchen has a vaulted and beamed ceiling with Velux windows, black marble countertops and island unit and a big green Aga; it opens into the travertine-floored sunroom which, like the conservatory, opens onto the rear patio.

Upstairs there is a spacious landing with doors to a veranda overlooking the garden. There are six bedrooms in all, four of them are en suite, all with fitted wardrobes: four, including the main bedroom, are in the original part of the house. Another bedroom in the new wing of the house, next to the study, has a Juliet balcony and there is a sixth en suite bedroom in the attic. The family bathroom has tongue-and-groove panelled walls and a free-standing slipper bath.

Outside there are large landscaped lawns at the front and rear of the house, a lily pond in the back garden as well as apple and plum trees. There’s plenty of room for parking.

The geothermal and underfloor heating has halved the home’s energy bills, says the owner – it now has a C1 BER rating. Kinvara is near the junction of Westminster and Torquay Roads, a short walk from Foxrock village, and a short drive from the M50.