Bric- a-brac breaks: Where to find the best antiques markets on holidays

Bored with sunbathing? Factor in a day at one of these flea markets instead 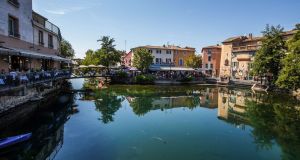 For antique lovers, collectors and curious shoppers alike, summer antique fairs and flea markets can be a great place to forage for unique pieces while on holiday.The rules are simple: wear comfortable shoes as you can end up walking miles at some of the bigger fairs; carry a certain amount of cash as some smaller dealers not accept cards, and it will also give you will better haggling power; don’t be afraid to bargain; and have a plan for getting your purchases home again.

The following are a list of some of the largest and most interesting fairs occurring throughout the summer:

For a tiny village of just 20,000 inhabitants, the Provençal village of L’Isle- sur-la-Sorgue has one of the highest density of antique dealers in the world with a vintage shop for every 66 inhabitants. Four times a year the picturesque village transforms into one of the largest antique and flea markets in Europe, attracting up to 120,000 visitors.

A veritable Ali Baba’s cave for antique and flea market lovers, this year the market is divided into sections which also offer contemporary art and design in addition to antiquarian stands. See foire-isle-sur-sorgue.fr

Taking place on Aix-en-Provence’s most famous avenue, this fair of over 50 stands is a perfect blend of chaos and curiosity as the stands spill into the adjoining avenues and side streets. A bit of a treasure hunters dream, it offers a lovely way to get lost in the town while rummaging through stands selling everything from vintage clothes, costume jewellery, collectables and antiques. See aixenprovencetourism.com

This huge and long-standing fair at the Newark and Nottinghamshire Showgrounds enjoys the distinction of being included in the book 1,000 Places to See Before You Die, and prides itself as being the largest antiques fair in Europe, with over 2,500 stands on the 84 acre site.

The hunting ground for treasure seekers is a magnet for dealers and antiquarian enthusiasts from all across the globe, and here it is the variety of stands, from traditional antiques to every conceivable collector’s items that attract vast crowds. See iacf.co.uk

One of the oldest markets in the world – first recorded in 1310 – the fair, which was originally an ecclesiastical celebration, attracted quacks, performers and junk in the 1700s. Today, it is home to the largest crockery market in Europe attracting up to 300,000 visitors at three events throughout the summer and autumn.

In addition to crockery and china, the fair sells everything from rare books and old lederhosen to real human hair. Geared towards families, there are lots of attractions in the form of acrobats, clowns, pony riding and a carnival to appease the boredom of young children who would otherwise find trawling through collectable stalls tiresome. See muenchen.de

Considered one of Flanders’ largest antiques and second hand markets, the Bruges Zandfeesten attracts hundreds of vendors and thousands of bargain hunters from far and wide. The fair, which literally translates as Sand Festival is held three times a year, on the first Sundays in July and August and the last Sunday in September.

Set around the canals and cobbled streets of Bruges, the fair is an attractive way to explore the historic medieval town. See brugsezandfeesten.be

New York and Brimfield, Mass, US

Now in its 40th year, this fair began when a group of friends, all of whom were antique dealers, rented an abandoned air strip on Route 20 in Madison New York. Today, it is the largest fair in the state with over 2,000 dealers and vendors.

Set out in fourteen fields, it is considered to be the mainstay within the antiques and collectable circuit, so much so it has given rise to the saying: “If you can’t find it at Bouckville, it probably doesn’t exist.” See Madison-bouckville.com

This sprawling show has been a must-visit destination for antique lovers for the past 50 years with over 6,000 dealers selling everything from Bakelite bangles to Victorian chamber pots. Busier than a rock festival, it is the largest of its kind in the United States and more than any other fair, comfortable footwear is a must. See brimfieldantiquefleamarket.com

Antiques fairs are held in the big market towns of Tuscany throughout the summer so find the one nearest your villa and aim to spend a morning there.

With over 200 stands, this market at the old railway station in Spain’s capital city features antiquities and modern design, with concerts and artisan food thrown in for good measure. The organisers have also opened the largest vintage shop in Europe: Vintaology on the nearby Calle Infantas. See mercadodemotores.es

‘I am the only person in the pool.’ A postlockdown stay at a landmark Dublin hotel
10