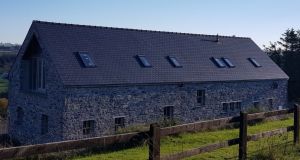 Up for raffle: the Keoghans’ home in Freshford, Co Kilkenny

An Irish house inspired by Grand Designs and built with 300-year-old limestone could change hands for as little as €6 early next year.

The raffle has been organised by a UK-based couple who want to sell their dream home while raising funds for a charity that helped them after their daughter was diagnosed with leukaemia earlier this year.

Mark Keoghan, an airline pilot, was born in Kilkenny but now lives with his wife, Lucy, and three children in the UK. They decided to raffle their second home, a four-bedroom barn-style house in Freshford, Co Kilkenny, after reading in The Irish Times about the success of a similar venture in Foxford, Co Mayo, this summer. They will donate 5 per cent of the ticket sales to Children’s Cancer and Leukaemia Group.

The raffle kicked off a week ago, and people have until the end of January to buy a £5 ticket for the nine-year-old hillside home, which is about 12km from Kilkenny city. Keoghan says he has been amazed by the response, with almost 20,000 of the 130,000 tickets already sold.

He built the house from scratch, he says. “I love Grand Designs, and I really wanted an old barn house. My father gave me an acre of land, and I found the aged limestone on the land. All the stone came from Tom Cody, who died 300 years ago.”

The description of the home on its raffle page adds that the house has “modern features such as underfloor heating and a pressurised water system fed from the barn’s own 400ft deep well” and that “if you happen to be up early enough you may just see the local deer in the garden who wander in from the adjacent forest.”

Keoghan, who is a pilot with Jet2, has been on furlough for all except a few summer weeks since March. “I suppose the main thing is we are trying to be more financially secure, and I certainly can’t afford to have two houses.”

He says he and his wife had “never planned to have a second home. We’re not really second-home people. I always thought I would live in Kilkenny, but that is not how it turned out.”

Their seven-year-old daughter, Mollie, was diagnosed with acute lymphoblastic leukaemia at the end of July. She faces more than two years of treatment before she gets the all-clear. “She has good days and bad ones, and she is having one of her lows today,” he says. “Today she looks like a sick little girl. And I would do anything if I could just swap places with her. I could never have conceived what this was like.

“We have an intensive block of chemo coming up, starting in December, and it will go right through Christmas, so we have the decorations up already. People think we are mad, but I don’t care.”

The family have until the end of January to sell all 130,000 tickets. If the raffle does not sell out, the prize will instead be 75 per cent of the money that has been raised; the charity will still get 5 per cent, and the website that’s hosting the competition, raffall.com, will receive the remaining 20 per cent. In that case the family would receive no money from the contest but would still own their Co Kilkenny home, and then be able to sell it in a more conventional way.

Chinese in Ireland: Raising children away from ‘tiger parenting’
5

Samantha Power: I called Hillary Clinton a monster, but I didn’t mean it
Real news has value SUBSCRIBE