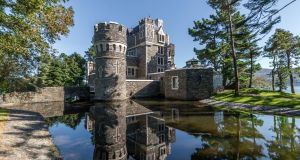 An Culu, a 9,000 sq ft Gothic Revival style castle in Kenmare, Co Kerry, which was built in the 1990s out of a former “tea room folly” that once belonged to a different estate.

A fairytale castle in Kenmare, Co Kerry that first went for sale at €15 million at the height of the property boom in 2007 has been sold.

An Culu, a 9,000 sq ft Gothic Revival style castle, has spent nearly 13 years on the market but Savills announced on Wednesday that the property has been sold “at a price close to the asking figure of €4.5 million”.

The real estate agency said the new owner intends to spend a large part of the year at An Culu “where he plans to entertain overseas guests and business associates as well as being able to appreciate some down time in this luxurious haven”.

The sale represents one of the largest country residential property sales in Ireland this year.

It sits on 1.8 hectares (4.5 acres) of grounds and comes with a moat and a drawbridge, turrets and towers, a minstrels’ gallery, grotto-style swimming pool in the basement and gas-fired torches that can be activated by remote control.

Standing on the shores of Kenmare bay, the castle was developed in the 1990s by Kevin Reardon, an English businessman with Irish roots, on the site of a former “tea room folly” that once belonged to a different estate. It was intended as a luxury holiday retreat for Mr Reardon and his family and the grounds include a landing spot for his personal helicopter.

Catherine McAuliffe, Savills Director in Cork, said “this was definitely one of the most unique properties we have had the pleasure of selling”.

Michelin 2021: The Irish restaurants in the running for tonight’s awards