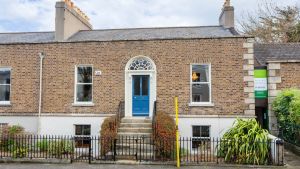 A villa-style house near the bypass in Blackrock, Co Dublin has been well cared for by the family who moved here 17 years ago. Built in the 1890s, number 54 Carysfort Avenue has many of its original period features – centre roses, marble fireplaces, shutters on windows, the fanlight over the front door – and it also has potential to expand, subject to planning permission.

“The attic was a big surprise when we opened it up – it’s a big wide space,” says the owner. The family didn’t revamp the space, but the owner believes it could accommodate two bedrooms.

The house is a compact “upside-down” villa-style house, with two formal rooms, two bedrooms and a bathroom upstairs, and a kitchen, dining room and two further bedrooms – one currently set out as a family room-den – downstairs at garden level. All the rooms have wood floors and most are painted in neutral shades.

The drawing room and dining room – on either side of the front hall – have matching black marble fireplaces, centre roses and recessed wall alcoves; both have wooden floors and are painted pale grey.

A few stairs at the end of the black-and-white tiled front hall lead up to two double bedrooms overlooking the rear garden. A fully tiled family bathroom between them has a rolltop bath and shower.

Downstairs, the kitchen and interconnecting living-dining room run from the front to the rear of the house. The kitchen has cream units, an island with a polished granite top, timber countertops and a large range inset into a tiled chimneybreast.

The living-dining area, up a few steps through a wide arch from the kitchen, opens through French windows into the rear garden. On the other side of the downstairs hall, a double bedroom has fitted wardrobes; a larger bedroom is fitted out as a den, with shelving and a wood-burning stove set into a tiled fireplace with a dramatic red backdrop. There is also a shower room at this level.

The garden has a patio, an artificial grass lawn up a few steps and more steps leading up to a wide raised deck bordered by a stone wall – with a hot tub sunk into the deck. There is handy side access to the rear garden too. The front of the house has a railed entrance, with residents’ permit parking on busy Carysfort Road outside.

The house is a short walk from the village and Blackrock Dart station, and the number 114 bus stops outside the front door.