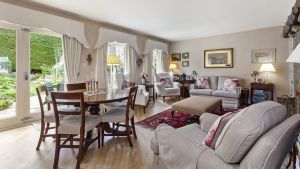 Though designed by the late architect Wilfred Raftery, the mews located at 38 Heytesbury Lane – the small avenue that links Wellington and Waterloo Roads – was actually imagined by three children aged six, nine and 11.

“We had rented on the lane and our daughters did not want to move as they loved it so much. My nine year-old at the time would ask neighbours what size their property was and how many bedrooms they had. Deciding there was nothing that suited us, the three girls designed the house on a Lego board and said we had to buy a site” recalls the owner of number 38.

Describing Raftery as “absolutely brilliant”, he took the Lego board and set about realising their dream home. “He knew we didn’t have a lot of money at the time, so his emphasis was on the essentials.”

Decades later this is evident, as the house – though constructed in 1985 – has a BER of C3 despite its age.

With four bedrooms upstairs and two large rooms at garden level, the daughters “decided against a separate dining room as they knew I did not want to miss any of the chat while cooking in the kitchen”.

Describing the Ballsbridge lane as being “like a village”, despite its location so close to the city, the owner says it is like living in the countryside thanks to the gardens.

When the house was being built, the owner was advised by landscaper Brian Maher of The Garden House in Malahide to take gardening classes which she duly did.

“Marie Staunton [the horticulturist and lecturer] gave the most brilliant advice during the classes. She taught me how to do a grazing bowl, where you take a wide bowl measuring about two feet in diameter, and plant it with lettuces, spinach and pea shoots, which you just keep rotating and it supplies you with greens all summer.”

In addition, the garden which is low maintenance thanks to artificial grass, has provided the owner with an abundance of culinary delights including raspberries, strawberries and plums along with a plethora of vegetables. “We survived the entire two lockdowns on fruit and vegetables from the garden, and still have lots of tomatoes to get us through the winter.”

While it sounds like a home in a rural setting, the location of this mews is just a 15-minute walk from St Stephen’s Green.

The interiors, extending to 133sq m (1,432sq ft) are bright thanks to French windows which open to the front (morning) terrace – designed by Joe Lawrence of Lawrence and Long – with double doors opening to the rear garden.

Even the bathrooms have an abundance of natural light as the skylights shoot up into the attic space.

The owner is downsizing due to an empty nest and has placed her home on the market through Bergins Property Consultants seeking €1.8 million.