A walled garden was part of Jane Willoughby’s dream home. Then she saw this one 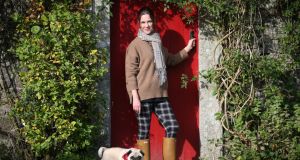 Jane Willoughby and her dog Oscar pictured at the entrance to the garden at her home Donaguile House in Castlecomer, Co Kilkenny. Photograph: Laura Hutton/The Irish Times

Everyone has their idea of a dream home. Once upon a time, kids used to draw square boxes with pointed roofs, and windows on either side of a door, usually red. These days they’re just as likely to draw castles or flats. But the essential ingredient for Jane Willoughby’s dream was always the garden – specifically a walled garden.

“I grew up with one,” she says of her childhood home at Ballyrafter in Lismore, Co Waterford, which incidentally is currently on the market for €1.15 million. There had been a walled garden there that caught Willoughby’s young imagination – until a roof was put on to turn it into an equestrian centre.

There are many more, and often more unexpected reasons for finding your dream home, but when Willoughby and her husband John saw the Victorian Donaguile House in Kilkenny’s Castlecomer, she was smitten.

“We bought the house too early,” says Willoughby, who lives in Dún Laoghaire with John and their teenage daughters Sophie and Simone. “The girls are in school, but the plan is, in a couple of years, the two of us will move down. We’re going to upsize when the family gets smaller! It’s completely daft. Maybe we’re completely daft,” she muses, not sounding too worried.

“We bought it three years ago, and I know it’s cliché, but it ticked all our boxes. We made the mistake of going to see it, and it was – almost – exactlywhat we wanted.” So the couple decided to buy and make ends meet by letting via Airbnb. “We use it too, as much as we can, and it’s working really well for us. Or, at least, it’s washing its face . . .” Not only is it washing its face, Donaguile is so lovely, it featured on RTÉ’s Home of the Year last year.

The house, which had been owned by artist Polly Minett and her husband Ivan Powell, was in good shape when Willoughby bought it. “We weren’t looking for a renovation job,” she says. “We’d already had a bad experience renovating our house in Dún Laoghaire, and Polly and Ivan had done this as I would have done it.”

What Willoughby did do, however, was to add her own art. Originally a mural artist – her work graces walls from the K Club to Mount Juliet and more – her period-style panels are wonderfully in keeping with the timeless but chic look and feel of Donaguile House.

“I had studied interior design online, and then I did a course,” she says of her start as an artist. “Do you remember when ragging and dragging was all the rage? I learned glaze work, marbling and distressing, and I found it came really easily. I enjoyed it.”

Envisaging a career doing specialist paintwork, an early job was a colour wash for Meryl Long at Martinstown House. “She had seen a small trompe l’oeil I had done for a friend of hers, and she said would you consider doing a mural?” In fact, Long suggested that if she liked it, they’d come to an agreement, and if she didn’t she’d paint over it – and they’d come to a different one.

“I sweated over it,” recalls Willoughby. “But she was delighted, and it’s still there. From there on, I went from mural to mural. It was really interesting and I met some great people. And it fed into my particular set of skills: I’m good at scale, balancing colour and incorporating a mural into an interior so it looks like it was always there. I would never have known I could do that – it just worked out.”

Describing her work, during the boom (“you know, the original boom, when there were those huge big mansions going up”), Willoughby casts her mind back to days of painting on the vast canvasses of the walls of the rich and occasionally famous.

So, did she ever get asked to paint anything really ghastly, hideous and tacky?

“Oh yes,” she laughs. “One person wanted a life-sized portrait of golfer Colm Montgomerie, placing a golf ball on some green in some particular golf course in America. And he wanted this in a bedroom. I knew it would be completely awful, so I said I wouldn’t be able to do it well.”

She also recalls hours painting in behind toilets: “bathrooms and hallways are the most popular places for murals. Places you don’t spend so much time in, so you don’t tire of them. Murals are seen as heavy decoration, but I don’t agree with that, they can be subtle and soft.”

These days Willoughby works to a smaller scale, although her canvases and panels are inspired by painted decoration. “I think my work is out of time, out of fashion, but I love it and I love the interiors you see that sort of work in.” Some are based on chinoiserie, some are florals and still lifes, and some come from figures from art history.

Willoughby mainly works from her Dún Laoghaire kitchen in the winter, while summers are spent looking after the six-bedroom Donaguile House.

“It’s not as large as it looks, it’s only one room deep. But it is big. Walled gardens almost always come with houses that are too big.”

So what about that garden? “There are two acres, and it’s quite manageable, but when you’re trying to keep weeds at bay and keep on top of it, it’s a lot of work.”

Willoughby, who comes across as one of those brilliantly inventive, engaging and undauntable women, came up with a tasty solution: she invited a chef to come and help.

“Keith Boyle set up the Lady Anne Restaurant in Castlecomer. It’s a fine dining restaurant, practically at the bottom of our avenue.” she says. “I had had a group of Americans staying who wanted a chef, and I didn’t know Keith – yet. But he came and cooked this beautiful, beautiful food, about eight courses, with a lot foraged from the garden.”

Suggesting a barter system (“I love the idea of barters”), Boyle and Willoughby agreed to swap gardening for a space to grow food for the Lady Anne. “With just 16 seats and one sitting, you can grow anything you want,” says Boyle, taking up the story. “We devised a plan, and looked at what we were hoping to have when the restaurant reopened” after lockdown.

A common mistake when kitchen gardening, says the chef, is overpopulating the ground. “A lot of people tend to grow, and grow a lot at one time, and so you end up with a glut.”

Instead, Boyle planted just one row of kale, “and when we grew red cabbage, we grew eight of them. We knew there was no point in growing 50 kilos of broccoli. It looks great, but when you start to cut it’s completely empty. Grow in moderation,” he says, which is a tip I could definitely learn from.

Adding edible flowers such as  cornflowers, viola and borage to the already abundant herb bed, which also includes bronze fennel and wild strawberries, Boyle sourced some very intriguing potatoes. “Maria Flynn from Ballymakenny Farm in Louth has really wonderful heritage potatoes. Red Emily and Violetta and Pink Fir Apples. They look amazing, and taste amazing. She has a spud shack where you can go and buy your own.”

The collaboration clearly suits both Boyle and Willoughby. “When she first opened the gate and said, ‘what do you think of this . . . ?’” he pauses at the memory. “You’d never expect to find a Victorian garden just up the street.”

It is actually even closer than that. “People come to the restaurant at about 7pm. Usually I leave at 6.45, to go to the garden and pick the herbs and flowers. And I’ll walk back through with the basket. It’s 90 seconds from the door to the restaurant. That’s zero food miles.”

Are there any other garden finds he would recommend? “Kohlrabi. And beetroot,” he says. “We were able to have a beetroot dish on for a week, it’s amazing to have the freedom to do that. And marjoram. I use it for the flowers, and the leaves are very pretty as a garnish.”

“Keith eats things you wouldn’t think of as edible,” laughs Willoughby. “And he takes things I’d think of as weeds. He’s as happy as can be.”

Donaguile House plans to reopen on Airbnb in April 2021