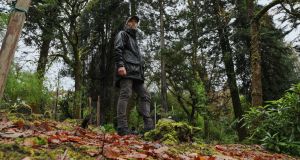 Alan Power, originally from Cork, has recently moved back to Ireland, to manage Derreen Gardens on the Beara peninsula. Photograph: Valerie O’Sullivan

If your idea of the perfect garden is one of lushly colourful herbaceous borders, primped lawns and razor-sharp topiary, then Derreen is not for you. Instead, this historic woodland garden on the Beara peninsula in southwest Kerry is a place prized for its untamed beauty and sense of otherworldliness, where groves of giant tree ferns, towering bamboos and Himalayan rhododendrons flourish beneath the shelter of lofty conifers and its vistas offer starkly beautiful views out across Kenmare harbour and the looming Caha Mountains.

Laid out by the fifth Marquess of Lansdowne between 1870-1927, this 60-acre sub-tropical garden enjoys a climate shaped by the Gulf Stream, where annual rainfall can be measured in metres rather than centimetres and violent winter gales are a given but frost is a rarity. Protected by its dense, leafy shelterbelt, the plants that grow here do so with wild abandon, a crazily accelerated rate of growth that’s both a curse and blessing for its new head gardener Alan Power. He took up the post earlier this year after being offered the position by Derreen’s owners, Claire and Charlie Bigham (the great-great grandson of the garden’s original creator).

“One of the greatest challenges that we face at Derreen is how to manage that rapid speed of natural regeneration,” says Power. “For example, the garden’s tree-ferns (Dicksonia antartica) and some of its species of rhododendrons have naturalised to the point where there are now thick carpets of baby seedlings beneath the parent plants. It’s absolutely amazing to see. Likewise the garden’s silver fir trees – some are now over 46m tall – have self-seeded in abundance so these need to be sensitively thinned or have their canopies reduced to give the garden some breathing space. A few have also fallen to storms over the years, something that’s inevitable in a mature woodland garden like Derreen, where most of its plants are growing in a very shallow layer of acidic topsoil over bedrock.”

Power began his new job in August, arriving in Kerry with his wife Louise and their young son Oisín just months before the pandemic’s second lockdown. A graduate of Writtle College in the UK, this Cork-born horticulturist’s career as a professional gardener has previously taken him to some of Britain and Northern Ireland’s most famous historic gardens including Mount Stewart, Hidcote and Stourhead. He spent almost 17 years as head gardener of the latter, by the end of which he knew the centuries-old garden as intimately as a lover. “It takes time to build that sort of relationship with a garden, to get to that point where you have that deep level of knowledge and understanding of its history, its plant collection, its growing conditions.”

But the invitation to become head gardener at Derreen was a once-in-a-lifetime opportunity that he couldn’t resist.

“When I was head gardener at Stourhead [a National Trust property in Wiltshire], I used to visit Derreen during my holidays and was enthralled by its beauty and its possibilities. It felt like a secret garden. I’m so excited to really get to know it; to start gently peeling back the overgrown layers; to properly explore its archive of plant records; to gradually revitalise and add to its planting, which I’ll be doing in close collaboration with the Bighams.”

Future projects include a thorough audit of Derreen’s existing plant collection, some dating to the latter half of the 19th century, with many choice species of trees and shrubs brought back from plant-hunting expeditions in the Himalayas and elsewhere. Along with its glorious collection of mature coniferous trees, many of which species hail from South America and the Himalayas and which have grown to gigantic proportions in this sub-tropical Kerry garden, Derreen is especially famous for its wonderful collection of choice rhododendrons. Examples include Rhododendron falconeri, R. aboreum, R. sinogrande, R. niveum, R. keysii, R. wardii, R. macabeanum, R ‘Loderi King George’, R. shilsonii, and R. griffithianum, all of which thrive in its protected microclimate and damp, acid soil.

“Some of the garden’s oldest rhododendrons are reaching the natural end of their life cycle but we want to extend that as much as possible to allow time for new plantings to mature. So we’ve started thinning out the thickets of pernettya and gaultheria around them and mulching beneath them so they have a fighting chance. We’ve also started lifting and transplanting some of the garden’s glorious tree ferns – Derreeen is believed to have some of the tallest specimens in Ireland – to give them more space. Fascinatingly, according to local lore, these first came to the garden via Kenmare harbour, where their trunks were being used as ballast by visiting ships.”

Other plans in the pipeline include the creation of an organic kitchen garden to supply Derreen’s new coffee shop, which is run by Jamie and Katherine Bingham. From next spring Power’s wife Louise, an artist and gardener, will also be taking on the task of rejuvenating the more ornamental planting around the house. Rebuilt in the 1920s, the building stands to the upper end of the steeply sloping site, above its sub-tropical woodlands and winding paths and just next to Derreen’s famous giant “rock”, a huge flat outcrop of stone that rises abruptly out of the lawn.

Sometimes described as a gardener’s garden, does it surprise Power that Derreen is not better known both in Ireland and abroad?

“I think it’s possibly underrated in terms of its importance. But that’s going to change as more and more people visit to see it for themselves. It’s a magical place with its own very special atmosphere and a uniquely beautiful setting. You can’t help falling in love with it.”

Derreen gardens are open to the public throughout the year. See derreengarden.com for details.

In colder or wetter parts of the country, it’s best to lift and store dahlia tubers undercover over the winter months to avoid the risk of them rotting or being killed by harsh frosts. Choose a dry day to do this, using a garden fork to gently dig up their fleshy tubers. Cut the stems back to the ground, shake off any excess soil, label and then place in a box in a cool, dry, dark, frost-free garden shed. Cover with a few layers of garden fleece/old towels for extra protection.

The bare-root season is now in full swing with many kinds of trees, shrubs, hedging and fruit trees and bushes available from all good garden centres for a fraction of the price of potted specimens. While it’s important to plant bare-root plants as soon as possible after buying them, hold off until conditions improve if the ground is frozen or badly waterlogged. In the meantime, place your bare-root plants in a cool but frost-free, dark spot and make sure their vulnerable root systems don’t dry out by spraying them with water and putting them inside a plastic bag. Alternatively, temporarily “foot” them into the ground until you can plant them into their permanent position in the garden. To protect the soil from compaction during planting, it’s a good idea to place a few wooden boards on the ground to spread your weight.