Moving On: We were still young and healthy enough to downsize 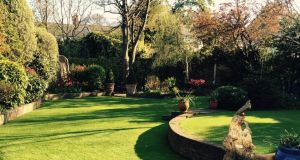 Making our minds up: we came to appreciate our surroundings more. We spent even more hours working on and relaxing in our lovely back garden

After 30 years living in the same south county Dublin community the notion of trading down had begun to cross our minds in recent years. We had a wonderful family home off Mount Merrion Avenue but our children had long flown the coop. We no longer needed the space or the proximity to five great schools, the Dart, shopping centres or buses.

Most of the bedrooms were unoccupied, except at Christmas. The study had become another cloakroom and the attic den a massive storage hold-all for everyone’s rubbish. After 22 years the house also needed some modernisation.

We found ourselves in the not unpleasant position of lazily debating the virtues of bucolic bliss or suburban A1-rated homes; houses that needed renovation or walk-ins; apartments versus houses. Property supplements, a weekly staple, were now being scoured for bargains, while researching independent economic expert market forecasts began.

Trading-down conjures many different images, chief among them for us was freedom from financial woes and starting a new life. Healthier lifestyles, new hobbies, more travel and more money. No mortgage, no car loan or credit card demands. For once, having the freedom and the financial means to tackle a bucket list adventure.

These exciting thoughts battled with our reluctance to leave our home, our very special garden, friends and neighbours, right down to chemist, doctor and shops. Leaving our much-loved local, Gleesons, was a huge consideration too.

Like many life-changing decisions, it was not a single event that prompted us to trade down

And were we being presumptuous assuming that we would fit in as well in another community? Could we live as happily there? Were we being selfish, cashing-in the family inheritance? The last question got short shrift, I admit, but nonetheless was a factor. So too was the fact that this home hosted so many extended familial celebrations from christenings to a joint 85th birthday party and all the landmark ones in between.

Like many life-changing decisions, it was not a single event that prompted us to trade down, but a number of developments that propelled us to finally put the house on the market.

When both our beloved parents died it forced us to confront our own mortality and how we wanted to spend the remainder of our lives. While looking after our parents in their final years, we also discovered that we were happy to spend most nights quietly at home. We were getting old.

I was also shocked to learn some time earlier that my much anticipated pension (after more than 20 years working in the same organisation) was virtually worthless and at retirement age will have lost 90 per cent of its value. Could I sacrifice my long-held financial independence just to retain a large suburban garden? I very much doubted it and this changed my perspective significantly. If we could sell the house and buy a cheaper one then I could invest the balance to provide a pension income in later years.

Adding weight were the opinions of three experts at the start of this year who each predicted the residential property market was reaching, or had reached, a peak. I respected their opinions even though I knew it is impossible to accurately predict the market given the number of variables including Brexit, Trump tantrums and a potential worldwide equity collapse.

A trusted friend working in property also agreed with our decision to trade down, having strenuously resisted it when we broached it with him three years prior. In the interim prices had increased, and, because a profit on principal private residences is tax free, our vacillating had paid off. But times had changed.

Too many friends were dying, many of them our own age, and this propelled us forward

That did not stop us floundering around doing fruitless financial exercises and conjuring all sorts of alternatives for remaining in situ. Dozens of friends and family were consulted in all sorts of detail. We came to appreciate our surroundings more. We spent even more hours working on and relaxing in our lovely back garden. We had no idea just how deeply it anchored us, until, as we progressively reminisced, we realised how much we would miss it.

Pushing that indulgence aside, we finally agreed to do it, for all the reasons outlined but also, most importantly, because we were big enough, bold enough and healthy enough now. We might not feel the same way in five or 10 years’ time. Too many friends were dying, many of them our own age, and this propelled us forward.

So, after three years of dancing around it was time to bite the bullet. We were lucky to have had that time to properly consider all of the options and it allowed us to prepare ourselves mentally for what is, after all, a major life-changing adventure.

I choose the word adventure carefully to avoid the negativity often associated with this type of commerce. Now it’s down to business with a greater sense of purpose bolstered by more informed anticipation and some healthy apprehension.

Cliodhna O'Donoghue is a property journalist