Dig deep: How to finance a home renovation

If refurbishing is a new year’s resolution, it’s time to figure out how to pay for it 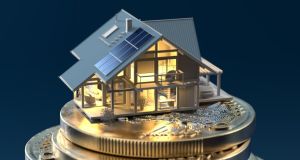 For major renovation work and extensions you will need formal estimates from your architect.

If getting work done is on your new year’s resolution list, it’s time to figure out how to finance it.

The best way, and the cheapest, to pay for anything is through savings. If you haven’t sufficient savings, and can afford to wait, start improving your bank balance first. Put money away each time you get paid and put the work off until next year instead.

If you really can’t afford to wait, then borrow. For most home improvements, that means topping up an existing mortgage. Figures from the Banking and Payments Federation show the value of top-up approvals was up 14.4 per cent in the year to October 2019.

“Banks are more than willing to lend for home improvements in the form of a mortgage for something like a new bathroom, bedroom, kitchen, windows or painting,” says Michael Dowling of brokerage Dowling Financial.

Staying with your existing provider and going with a top up is most common option and you can choose to do it over the remainder of your current mortgage or for a shorter term. Either way, “It’s the cheapest form of credit for home improvements that there is,” he says.

Up until just a few years ago, all those in receipt of mortgage top-up approvals could draw funds down only on a phased basis, by providing receipts for work as it was completed.

Now, for amounts of up to €50,000, you only need to provide estimates. “They’re not looking for receipts because there is an element of trust, you are after all their customer and have a history with them,” he says.

If, however, it is a major renovation costing more than €50,000, you typically will need receipts and the money will be released in stages. “No matter how much you borrow, it will never be more than 90 per cent of the value of the property,” says Dowling.

For major renovation work and extensions you will also need formal estimates from your architect. There are additional expenses involved too, including an up-to-date valuation by a surveyor, which costs about €150, and solicitor’s fees, for which €750 would be the norm.

“All in all you can expect to pay around €1,000 in terms of costs for a top-up mortgage, as opposed to financing it through a loan, but offset against that is the much cheaper repayments,” says Dowling.

The reason why “top ups are an active part of the market is because it gets the money cheaper and for longer, and, as it’s a direct investment in their home, people are happy to make it”.

By contrast, traditional bank and credit union lending is more expensive and the longest term is most likely five years. As a rough rule of thumb, a mortgage repayment interest rate is about a third of that of a bank.

As a top up is a mortgage application, the amount of legwork involved in applying is significant too, and includes up-to-date documentation such as salary certificates, P60 payslips and, if you are remortgaging with a new provider, up to 12 months’ worth of bank statements.

It’s worth shopping around for rates and other inducements too. As well as traditional bank players such as AIB, Bank of Ireland and Ulster Bank, and former building societies EBS and PTSB, are newer non-bank mortgage lenders ICS, the former Bank of Ireland-owned institution bought by Dilosk, and Finance Ireland.

Currently KBC is offering the cheapest mortgage rates, but the market is dynamic so that changes regularly, says Niall Coughlan of Irish Mortgage Corporation. Many offer attractive cash-back incentives too which, although you’ll pay for them over the term of your loan, can mean additional cash to put into the house.

If you are looking to remortgage, a good independent broker is invaluable as a broker will ensure all ‘i’s are dotted and that the documentation is in order before applying. If the broker does not think you’ll secure the loan, he or she will not submit an application. Instead, says Coughlan, they will work with clients over the following six months to get their accounts are in order, to ensure they are ‘application-ready’ next time around.

With interest rates so low, now is a good time to focus on paying off your existing mortgage rather than taking on a new one. And if you do need to borrow, don’t forget the credit union. Each is autonomous so will have different terms and conditions but all have a home-improvement product to offer.

“There are no fees or charges either,” says Fergal McPartland, manager of Drumshanbo Credit Union, in Co Leitrim, who points out that credit-union loans are insured too. With a mortgage you have to factor in the additional cost of mortgage protection, in the event that you die before it’s paid off. With a credit-union home-improvement loan, “credit unions pay that for you,” he says.