Make a move to Sallins: a tidy town that’s growing 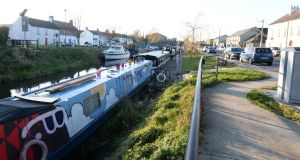 Barges on the Grand Canal at Sallins. Photograph: Alan Betson / The Irish Times

Usually, if you want to live a 20-minute rail journey from the city centre, it’ll cost you. But just 3.5km from Naas centre and 40km from Dublin, Sallins is a commuter town that feels closer than many others, thanks to that famously short train ride. And it’s growing all the time; Sallins has been ranked as Ireland’s most densely-populated town outside Dublin in the 2011 census.

More and more amenities are arriving on stream, from chemists and cafes to supermarkets and takeaways. The area near the canal is truly beautiful, thanks to the efforts of the local Tidy Towns group. Kildare village, Newbridge, the Blessington Lakes and the Wicklow mountains are a short drive away. Naas, with its own bounty of services and shops, is also a five-minute drive away.

Sallins is changing all the time; the greenway will be finished by late spring/early summer 2020. A new GAA pitch is mooted, while a new ringroad to service the M7 traffic is nearing completion, and is likely to move traffic away from Sallins. And, compared with Dublin house prices, you get a lot more bang for your house-buying bucks.

As is the case in most nascent commuter towns, infrastructure often takes its time to keep up with the exploding population. Sallins is no exception in this regard. The Main Street is due an injection of energy, and with 86 per cent of the population commuting outside of the town to work, things can be pretty quiet during the weekdays. And, while that 20-minute train ride is a godsend, good luck getting a seat on those busy Irish Rail services.

There are opportunities aplenty for first-time buyers on average salaries to get on the ladder. 165 Oldbridge Station is well-proportioned 2-bedroom terraced house in great condition (€237,500, via Sherry Fitzgerald). €180,000 will buy No. 21, a 2-bedroom duplex in the centrally located Sallins Town Centre complex (via MM Ward Estate Agents). The 3-bed, 2-bath, A-rated 73 Willouise (€325,000, via Sherry Fitzgerald) is in a gorgeous new estate next to the canal, and this semi-detached, with a sizeable garden, is pretty much in showroom condition. In the same estate, a 5-bedroom, 1800-square-foot detached house is ready to buy off the plans (€470,000, via PJ Garvey).

Rental properties are relatively thin on the ground – at the time of going to press, the only available rental was a one-bedroom apartment, priced at €900 a month.

Sallins’s younger residents like to hang out at the Lock 13 gastro pub (Canal View), which has a great selection of good craft beers and a nicely planned menu. The Kildare Brewing Company (also on Canal View) is another spot with a welcoming atmosphere. Elsewhere on the canal, TwoCooks (5 Canal View) holds a Michelin Bib Gourmand and has the exceptional food to match (you’ll need to book in advance though). Alternatively, the Bridgewater Inn (3 Canal View) and Thai Station (9-10 The Waterways) are also popular with locals. If you’re in your 30s or 40s, you could do worse than try the Railway Inn (Main Street), known in the area as Ned’s.

Kids will never be short of others to play with, and most estates are quiet, with their own green spaces. Sallins playground opened earlier this year following repairs, to the delight of local families. The local schools are busy, although there are nine primary schools and five secondary schools in the parishes of Naas, Sallins and Two Mile House. St Laurence’s National School (Catholic, mixed) and Sallins National School (Catholic, mixed) are in the immediate area, while Scoil Bhride (Catholic, mixed) is on the Sallins Road, on the way to Naas.

JJ Kavanagh’s bus service to Sallins from the City Centre is reliable and regular, but most people take advantage of those speedy rail times with a regular Irish Rail service from Heuston Station. The N7 will get you there within an hour from Dublin.

“Having spent 10 years in really big cities, I was looking for a less hectic lifestyle and found myself living in Sallins. I love it here; the canal is fab and you can walk for miles on it, there’s a great golfing community and a cool golf fitness studio in the village and a few nice local pubs. Naas is buzzy and only 10 minutes away but we find ourselves in TwoCooks, it’s a great neighbourhood restaurant. [My boyfriend and I] love wine and TwoCooks host wine tastings and events, which we go to a lot! I’m delighted to have discovered such a nice area.” Michelle Lawlor, owner of the Nude Wine Company (thenudewineco.ie) and the DIY Wine Course.

Do you live in Blanchardstown? If so, please tell us what it’s like to live there. Do you have a favourite place or a pet peeve in the neighbourhood? Email homeanddesign@irishtimes.com