Have yourself a very vintage Christmas: antique gifts for all 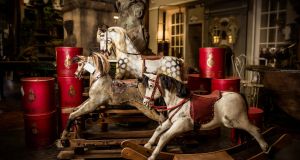 The Store Yard has a selection of 19th century rocking horses, from €350, and vintage red hat boxes from Christy’s of London c1960, €90 each.

Antique gifts have a lot to offer. Not only are they the most eco-friendly choice, they are made to last and for buyers offer a more relaxed alternative to the mayhem of high-street shopping.

While once we associated brooches with our grandmothers, younger generations have embraced the brooch as a stylish and fun way to accessorise an outfit. Weldon’s on Clarendon Street in Dublin has a fine selection of every type, from miniature mandolins to various bugs embellished with coloured gemstones. Prices range from €1,000 to €21,000 for a heavily encrusted diamond offering.

In Galway, Cobwebs have more affordable options that include a tortoise brooch by Ciner from 1960 (€160) and a lovely 1940s aquamarine for €200. Cameos are back in fashion and Michael Connell on Francis Street, Dublin has a 9k gold one for €120.

Though smoking is becoming a thing of the past, the 18k-gold 1920s cigarette holder by Boucheron at Weldon’s on Clarendon Street is just delightful (€1,250) should you ever need one for a 1920s flapper party.

As Christmas is the time for after-dinner games, Straffan Antiques has a lovely Regency rosewood games table, which would work perfectly as an occasional table for the rest of the year (€6,500). For those with a penchant for needlework, Adam’s At Home sale has a really superb silver nutmeg grater which has been repurposed as a pin cushion, and a sewing kit with an 18k gold thimble (both €100-€200).

They also have a 19th-century mother-of-pearl inlaid easel which would make a lovely gift for an artist (€200-€300). The Store Yard in Portlaoise has a great selection of large red vintage Christy’s hatboxes which will stylishly store craft material and games for decades (€90).

The Store Yard in Portlaoise has a good selection of 19th-century antique rocking horses (from €350), and for children or older readers who might appreciate The Beatles, de Burca Rare Books has a signed first edition of High in the Clouds, Paul McCartney’s children’s book (€1,250). It appears that members of one of the most famous bands of all time are trying to establish their legacy for future generations: Ringo became the voice of Thomas the Tank Engine, George had a cameo in The Simpsons and John Lennon’s animal drawings can be found in museums throughout the world.

Also in literature, but perhaps for older readers with an interest in fairies, pirates and wizards, is a selection from Norman Healy in Galway that includes: James Joyce, The Cat and The Devil (€320); Lady Gregory, The Kiltartan Wonder Book (€395); James Stephens,  The Crock of Gold (€385), and WB Yeats, Irish Fairy Tales (€550), all of which have beautiful colour illustrations.

Art deco, silver, glass and works of art can make fine alternatives to a bottle of wine when calling in for Christmas drinks, and there is something to suit all budgets in antique shops and auctions.

The Silver Shop in the Powerscourt Centre, Dublin has a fine selection of silver-plated mother-of-pearl cutlery, priced between €35 and €50, and Adam’s sale on December 15th has a collection of silver items which could make a few different gifts at €150-€180. Michael Connell on Francis Street, Dublin has a 1970s silver sauceboat for €150, which would make the perfect receptacle for cranberry sauce on Christmas Day along with gold swivel cocktail sticks for aperitifs at €165.

For interesting pieces of glass, Yeats Country Antiques in Sligo has six Webb Corbett champagne glasses in Rolleston pattern (€450), while Niall Mullen on Francis Street, Dublin has a rather cool blue 1970s champagne bucket for €495, and from the same period, also in blue is a large paper weight (€195).

Gallery Zozimus on Francis Street, Dublin is having a closing-down sale, which ends on Christmas Eve, and all works are reduced by between 25 and 40 per cent. A lovely Luke Kelly sculpture by Brigit Beemster is reduced to €270 from €350; Sundance, a charcoal on newspaper by Pawel Jazak is down to €300 from €500; and A View, an oil by Keith Richardson is now on sale for €150.

Michael Connell who undoubtedly offers the best banter on Francis Street, has two important bronze sculptures for those with larger budgets. A 1.25m model of a boy fishing, Il Granchio by Delotto, from the early part of the 20th century (€5,250); and what Connell describes as a “particularly important piece”, cast from the original at the Uffizi museum in Florence. Described as a Grand Tour piece after travels by the well-heeled in the 1800s, the bronze, dating from 1886, was cast by Jules Ghaux and is for sale at €9,000.

It certainly has been quite the year for all things Jack B Yeats and de Burca Rare Books has JB Yeats, A Broadside No.1 (June, 1908-May, 1915) with 84 numbers complete as issued, which had a limited run of 300 copies. The Broadsides are in their original portfolios and housed in a custom-made quarter Morocco Solander box (€14,750). In addition Blackrock Rare Books has the first printing of Mosada by WB Yeats (€4,500).

A first edition of Dubliners, signed and illustrated by Louis le Brocquy, can be found at Blackrock Rare Books (€1,500), as can a rare first edition of The Borstal Boy, which is also signed by author Brendan Behan (€2,500).

For historians, de Burca Rare Books lists Michael Collins and the Making of a New Ireland by Piaras Béaslaí, a major work on Collins is by one of his closest friends. In two volumes, this edition is limited to 1,000 copies and bound in green buckram, with a medallion portrait embossed in gilt on the upper covers (€95). Also featured is a Sinn Féin Christmas card from 1916. Designed by Abhuistín Ó Maolaoidh, in colour with the names of the 16 martyrs on the cover design, the card is signed and dated 1918 and includes a verse from JK Ingram’s Who Fears to Speak of ’98, within drapes and a garland of shamrocks (€750).

First Editions at Pembroke Lane in Dublin has some super first editions which would make beautiful Christmas presents including: James Joyce, Ulysses, Odyssey Press, Hamburg, 1932, in two volumes in custom-made slipcase (€450); John McGahern, The Barracks, Macmillan, first American edition (€350); At Swim-Two-Birds by Flann O’Brien, Pantheon, New York, 1950 (€420); Door Into the Dark by Seamus Heaney, Faber, London, 1969 (€550); and The Táin by Thomas Kinsella and Louis le Brocquy, Irish University Press, in slipcase, €1,350. There is also a range of Irish and international first editions from €35.

Ulysses Rare Books on Duke Street, Dublin has a special limited edition – one of only 24 copies – of The Writers. A Sense of Ireland, a work by 44 Irish writers with photographs and signatures by all 44 contributors, including Nobel laureates Samuel Beckett and Seamus Heaney (€9,500); a signed first edition of Harry Potter and the Prisoner of Azkaban by JK Rowling (€2,500), and a first edition of The Time Machine, An Invention by HG Wells (€3,500).

For many the greatest wish for the holiday season is that of a bit of peace, here’s wishing you all a joyful and peaceful Christmas.

Rory O’Connell: ‘I didn’t get to know my sister Darina until I came to Ballymaloe’
3

Claire Byrne: ‘My parents had to stand by the bed while I got the last rites’
10