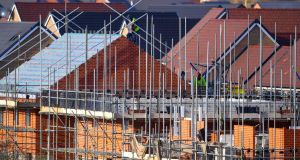 As the year winds down there is a marked difference in the property market between this year and last. In 2018 it roared out of the traps amid soaring price growth, but its wings were soon clipped as the Central Bank of Ireland’s restrictive lending rules hit home for house buyers, and the year ended with a whimper.

That whimper continued into this year, with flat transaction activity becoming a hallmark of 2019. For most people – those of us who don’t enjoy high-octane house-price rises – this made a welcome change from the roller-coaster ride that preceded it. Most observers would agree that it signalled a closing of the gap between housing supply and demand and an acceptance among sellers that the market wasn’t going to gallop upwards indefinitely.

But it also reflected a wider issue of affordability for buyers, in key Dublin areas in particular – and, astonishingly, despite the constant clamour around a housing crisis, new-home sales actually fell. In Dublin they dropped 18 per cent in the first six months of 2019.

The steady supply of standard three- and four-bedroom houses in the commuter counties of Kildare, Meath and Wicklow remains the key driver of new-home activity. And although those houses may be affordable, without joined-up thinking, mass developments on Dublin’s fringes bring their own sets of lifestyle and infrastructural pressures.

In the capital, where there is certainly demand for new homes, the biggest obstacle to development cited is a lack of speculative development finance even for seasoned developers. In addition, a growing concern among those developers appears to be significant delays in connecting new schemes to utilities. Meanwhile, soaring building costs and labour shortages mean that even when smaller schemes are completed within the suburbs they tend to be priced beyond the reach of the buyers who most need them.

It is not only the volume of homes coming to the market that matters but also the price of those homes. According to Dermot O’Leary, chief economist at Goodbody: “Our analysis this year identified a mismatch between the income distribution of the Irish working population and the price of new homes coming on stream. We believe this has contributed to a bifurcated market, with higher-priced homes suffering both in terms of price declines and in the weakness of sales. In contrast, those builders supplying into the first-time ‘sweet spot’ have seen sales grow significantly in 2019. Builders must be very aware of the income dynamics of a local area when setting price points.”

The retention of the Help to Buy tax-refund scheme for first-time buyers has been universally welcomed despite the Government using a protracted hard-to-get routine with stakeholders right up to budget day – a high-risk strategy, some would say, that had a cooling effect on buyer sentiment and so cast a pall over the autumn selling season. First-time buyers aided by the Help to Buy scheme continue to drive the new-home market.

A major feature of 2019 has been the further consolidation of the private rented sector as a market segment in its own right, with more than €1.5 billion invested. There are conflicting views on the benefit or otherwise of this new sector. One school of thought argues that the soaring cost of apartment development means these multi-unit blocks for rent would never have been built were it not for the arrival of institutional investors.

The counterargument goes that private-rented-sector funds are driving rents up because of the eye-watering premiums that investment firms are prepared to pay to buy up schemes in this on-trend sector. High rents will be the order of the day if they are to deliver a return to their investors. Meanwhile, private landlords are temporarily driving housing supply as they seek to cash in their investments, citing prohibitive taxes and an unlevel playing field in the face of the incentivised private-rented-sector market and rent pressure zones.

There are long-term implications from having 500,000 households in rented accommodation in a market where it is currently cheaper to buy a property than to rent it

Looking ahead, O’Leary cites the mortgage rules and the high cost of providing new homes as leaving many with no choice but to enter the rental market, so pushing up rents to all-time highs. “Given the very significant affordability constraints and the political preference for home ownership, we are likely to see ongoing tension between any new government’s policy goals and the financial stability goals of the Central Bank.”

There are also longer-term implications from having 500,000 households in rented accommodation in a market where it is currently cheaper to buy a property than to rent it. When these tenants retire or lose their earning power, will the State really be in a position to step in and pick up the shortfall?

Second-hand-home sales have slowed in the latter part of the year. Angela Keegan, managing director of MyHome, says: “There were 12 per cent fewer sales instructions week on week in the fourth quarter compared to the same period last year. Meanwhile, downward price trends in Dublin have been especially pronounced in more expensive areas, with Ranelagh, for example, seeing an average price drop of 7 per cent. In contrast, Clonsilla saw an average price drop of 2 per cent.”

Transaction levels remain on a par with last year’s, with the Residential Property Price Register recording about 48,000 sales to the end of November, while asking-price inflation has continued to slow throughout the country, Keegan says. This will typically be followed by a flattening in sale-price inflation by the end of the year.

As supply moves to meet demand there will be most take-up in areas that are providing homes at the right price. The reality check in pricing may continue in premium Dublin areas (and homes priced from about €800,000 upwards) where vendor expectations still need to move into line, and where actual prices paid for homes are routinely coming in on or below the asking price.

Where the shadow of Brexit was everyone’s favourite excuse last year for slow growth in the market, most observers would agree that that uncertainty has been built into pricing. At the top end it probably remains a factor as expats wait to see what happens after next week’s UK general election. Doubtless the effects of a no-deal Brexit will be felt here, but they can be offset by those businesses – and their employees – that will relocate to Ireland to continue to avail of euro-zone trading.

The biggest challenge for the Irish residential market is the delivery of adequate and affordable housing in suitable locations to meet the needs of all citizens. This means making new locations attractive and affordable for first-time buyers. It also means applying creative solutions to existing locations where we know there is demand.

The will is strong within the property sector to deliver a housing market that serves everyone’s needs. It just needs leadership at policy level to drive it

Property Industry Ireland, the property and construction arm of Ibec, is pressing policymakers with suggestions that might address the continuing market dysfunction. Unsurprisingly, there are calls for tax breaks and exemptions for private landlords and builders. But there is also a real sense that the Government is not listening to the stakeholders on the ground and all would benefit from more cohesive collaboration between the State and the private sector.

Although commercial development funded by international investment funds is in rude health, the same can’t be said of the residential sector. Property Industry Ireland is calling on the Government to prioritise housing development with a raft of measures that include the targeting of infrastructure funds to help realise sites ripe for immediate development; greater co-operation between the Land Development Agency and small to medium-size housebuilders; a time limit of about three years on capital-gains-tax exemption for owners of residential-zoned land and improved compulsory-purchase powers for residential-zoned lands.

Minister for Housing Eoghan Murphy is clearly already under pressure, having barely survived a vote of no confidence this week amid continued rising homelessness and calls for the scrappage of the Rebuilding Ireland programme. The will is strong within the property sector to deliver a housing market that serves everyone’s needs. It just needs leadership at policy level to drive it.