Light and portable, it prompted discussions about ownership and personal image rights 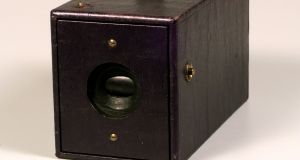 The democratisation of photography happened long before the smartphone. In 1888 George Eastman, a US inventor and entrepreneur who supported himself and his widowed mother by working in a bank, patented and launched his Kodak camera. Before then photographic equipment was so expensive and cumbersome that it was left – when getting your portrait taken was all the rage – to professionals or wealthy amateurs. His $25 camera was light, portable and easy to use and it prompted probably the first real discussion about who owns personal image rights.

In 1889 the New York Times noted that the craze for amateur photography had taken hold (by then 100,000 Kodak cameras had been sold) with a troubling trend of young men taking photos of unsuspecting women. Academic Jessica Lake has charted the raging debate about privacy that ensued noting the legal action taken by 17-year-old Abigail Roberson in the early years of the 20th century when she found her picture had been used on flour packaging and advertising without her consent. It prompted New York to enact a “right to privacy” law.