Enchanting cottage with rolling gardens in Sutton for €495k 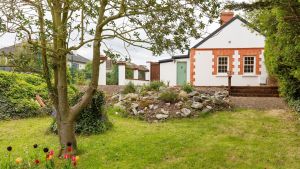 There really isn’t a straight line at 13 Baldoyle Road in Sutton, and this is one of the charming features of the three-bed cottage, which is home to Shannette Budhai, Jonathan Larkin and their daughters Jasmine and Celeste.

It wasn’t so much a renovation but a new build retaining the quirky features of the existing cottage with the addition of an extension designed by architect Gareth Brennan of Brennan Furlong.

“We purposely set out to find a derelict house, as we wanted to put our own stamp on it, but everything had to be redone, from the roof and chimneys to electrics and plumbing and it took ages to get planning,” says Budhai.

Originally from Guyana, Budhai moved to New York at the age of five, eventually ending up in Finland to study anthropology. From there a move to Ireland due to a sun allergy, saw her study at the University of Galway in 2008, where she met husband-to-be, IT consultant Larkin. The family, bitten by the renovation and building bug, are now in search of another project for their next home.

No ceiling in the house has the same pitch and it is laden throughout with quirky features, from the exposed brick in the walnut and sage-green kitchen, copper-effect tiling to the antique Nyborg stove which keeps the kitchen toasty on winter evenings.

To the front of the house lies the living room, where the family have a projector in lieu of a television, which can be hidden away, transforming the room – warmed by an open fire – into a quiet reading space.

Here Lincrusta Art Nouveau dado panelling has been used along the base of the walls. Currently painted in burgundy and gold, the expensive wall covering might be better served in paler colours to give the impression of a larger space.

The extension added three double bedrooms – two of which open onto reclaimed brick patios in the rear garden. Also added was a family bathroom with a colossal shower unit, and an upper storage unit in the ceiling of the corridor.

The property is bordered by a large front garden which rolls down to Baldoyle Road, and a rear garden with side access and a storage shed.

In the patios, Chinese wisteria is beginning to climb over a pergola, alongside a vegetable bed with herbs and greens. Beyond this is an old lawn which, with a bit of cutting, pruning and levelling could make a lovely garden.

The quirky cottage, located beside the Dart line is on the market through Sherry FitzGerald seeking €495,000.

Seat’s new Leon: It’s now better than the VW Golf it’s based on
2

When will the first Covid-19 vaccine be used in Ireland?
9