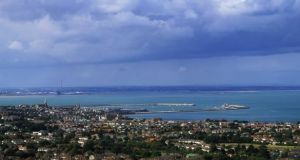 Dalguise is located in Monkstown, in close proximity to the coast and Dublin city centre

One of the finest private homes in Dublin, Dalguise House on Monkstown Road, looks set to be redeveloped by a company owned by property developers Bernard Doyle, Myles Crofton and tech entrepreneur Michael Sweeney, which has ambitions to build 300 new homes in its expansive garden.

The company, Lulani Dalguise, was incorporated in 2018 and has begun a consultation process with An Bord Pleanála seeking confirmation that it is reasonable to proceed with a full planning application under the Government’s fast-track planning process.

Earlier this year, the same company applied for planning permission for a development of just 100 units on the site but An Bord Pleanála ruled that the scheme required amendment prior to proceeding to a full planning application. It is possible that the proposed development was considered to be insufficiently dense, resulting in the applicants tripling the density in its latest consultation process.

It is unknown if the company is seeking planning permission having already bought Dalguise House, or if it has agreed to buy it subject to successfully obtaining planning permission. Alternatively, another possibility is that the developers and the site owners have agreed a plan to develop the site together as a joint venture.

If the property has been sold, or is to be sold subject to planning, due to the off-market nature of the deal the exact price paid by the Lulani company may remain a mystery. But with developers often paying site values upwards of €100,000 per apartment site and €300,000 per housing site in top-end locations such as this, the value of the house and adjoining lodge could be upwards of €30 million if planning permission is obtained.

For more than 50 years the house has been home to the McDonnell family. It is understood that it is currently home to Dr Goodwin McDonnell, whose parents, the late Dr Colm McDonnell and Margaret McDonnell, acquired the house decades ago.

Entries in the Registry of Deeds show that Dr Goodwin McDonnell and an offshore entity named Topazland disposed of certain interests in the property last month. But if the property has sold, it has yet to appear in the property price register. Delays can arise between the actual date of a sale and its appearance in the register, as transactions do not appear until the purchaser has paid stamp duty.

Both Mr Crofton and Mr Doyle previously declared bankruptcy in the UK following the collapse of the Celtic Tiger property boom. While they are both shareholders of Lulani Dalguise, each owning a third of the shares, they are not directors of the company. The developers’ wives are directors. The third shareholder and director, Michael Sweeney, was the founder and chief executive of software company Integral, which was sold to Sage in 2012 for a reported €20 million.

Dalguise House is considered to be one of the finest homes in Dublin by virtue of its exceptional grounds, which are believed to extend to over 8 acres, and its prime location. Situated at the heart of Monkstown village, it is just 250m from the seafront, shops and restaurants, and it is in close proximity to the nearby Salthill & Monkstown Dart station, affording ease of access to Dublin city centre.

Lulani Developments has already built a boutique of seven luxury homes, named Purbeck, directly adjoining Dalguise House. The new homes were developed on the grounds of a period house named Purbeck Lodge, which is owned by Michael Sweeney and they are priced at €1.075million and upwards, with two having recently sold for €1.15million each.

Given the individuals involved, the off-market Dalguise House deal may give the Dublin property industry a sense of déjà vu. Fifteen years ago, Myles Crofton pulled off a similar coup by quietly acquiring Chesterfield House and its nine acres of development land on Blackrock’s Cross Avenue for €47 million from the Roche family.

Plans to redevelop the grounds as a luxury residential scheme were derailed by the recession, and while the current owners Cairn Homes plan a substantial new development, 15 years later only one house has been built on the site. Extending to some 1,050sq m (11,302sq ft) in size, that one house is Myles Crofton’s private dwelling named Renesca.

Earlier this year The Irish Times reported his plans to demolish and replace the mansion with a 33-unit apartment block. Dún Laoghaire-Rathdown County Council refused the plans but a company owned by the Croftons has appealed the decision to An Bord Pleanála.

Tanya Sweeney: You get a lot of brain space back when you stop hating your body
5