Can our apartment block’s sinking fund be used to replace hall carpets?

Refurbishment, maintenance and improvements are often covered by such funds 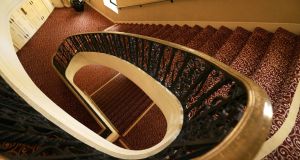 Chartered surveyors can help owners’ management committees to make a list of works which need to be carried out, and when

We have a well-managed owners’ committee in our relatively small apartment development who ticks off all the boxes, including building up the sinking fund to a healthy level. However, at a recent agm it was suggested from the floor that the replacement of hall carpets for the various entrance hallways should be covered in greater part by a contribution from the sinking fund, with affected owners contributing the balance.

First, I am glad to hear that you live in a well-managed development and that your owners’ management company (OMC) has been building up its sinking fund to a healthy level. My experience would be that most multi-unit developments (MUDs) in Ireland are unfortunately not in that situation. Many developments built in the Celtic Tiger years are now 10-15 years old and have OMCs that are only now starting to appreciate that, as their developments age, a range of investment projects are coming down the tracks for them.

The main legislation that governs the operation of MUDs is the 2011 MUDs Act. Section 19 sets out that a Sinking Fund shall be established for the purpose of discharging expenditure in relation to (a) refurbishment; (b) improvement; (c) maintenance of a non-recurring nature; and (d) advice from a suitably qualified person relating to matters (a) to (c).

In your case, the expenditure relates to the replacement of hall carpets for entrance hallways. On the face of it, this appears to qualify under point (a) in relation to the purposes of the sinking fund, ie, refurbishment of the common areas. As such, from what you say, the OMC would be entitled to use monies from the sinking fund to fund or part-fund this project.

You state that the balance of funding for the project would be contributed by “affected owners”. I am presuming that this is in accordance with lease agreements for the development. Normally expenditure relating to the common areas is spread across all owners, but this can vary, for example if a development includes different blocks, both apartments and duplexes, etc.

Your query raises a couple of broader issues. One is that refurbishment projects (some small, some large) arise more frequently in MUDs as they age, for example, repainting of parts of the internal common areas, lighting upgrades, refreshing of grounds and so on. Such projects can be important to ensure the development presents well, which is important for both residents and landlords.

Yet most OMCs would not wish such projects to be done as a substitute for building a longer-term sinking fund. As such, one option is for the OMC to add an extra line in its annual budget in relation to “contingencies /special projects”, and to explicitly budget for these, even though it may not know precisely what projects will arise in any given year.

This would allow for the funding of smaller projects and the part-funding of larger projects from this budget line, which would limit amounts required from the sinking fund. This is a more honest approach to budgeting, although it may mean some level of increase in annual charges to owners.

More broadly, to underpin the building of the sinking fund, best practice would suggest that the OMC ask an independent expert (normally a chartered surveyor, an architect or an engineer) to prepare a report identifying all “depreciating assets” in the development and the expenditure required on them over the next 20 years.

Such a report should cover structural aspects of the development but also other aspects, including projects such as carpet replacement. This report can act as an important resource for OMC directors and members in regards to setting sinking-fund contributions for owners in the annual budget.

Further information on sinking funds in MUDs is contained in the 2018 SCSI report Sinking Funds in Apartments – Meeting the Challenge, which is available, free of charge from scsi.ie.

Finbar McDonnell is a chartered property manager and a member of the Society of Chartered Surveyors Ireland; scsi.ie