Cottage living: I’m afraid of what might lie beneath the concrete surface 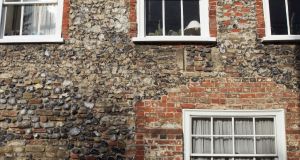 To further my education, I was dragged, on a day off, to see a nearby cottage conversion – or more accurately a “reversion” to more traditional insulating techniques better suited to old stone dwellings. Photography: Avalon/Getty Images

Away from home recently, I was speaking to my wife when I heard a sinister noise. I could tell by her breathing and the muffled ambient sound that she was talking ‘hands free’ and exerting herself outdoors. Then the ring of a hammer and the curt clink of steel on stone froze my blood and I realised she was chiselling away at the concrete cladding on our cottage. This was a moment I’d been half expecting and fully dreading. Months ago, she chipped out a hole the size of an orange “just to see how thick the render is”. She has since speculated on the beautiful granite that must surely lie beneath. She’d been softening me up and now she’d struck.

I asked anxiously how much she’d removed. “Only a bit,” she claimed “and anyway – this is just exploratory.” But we both knew she’d pick away until a critical mass was reached, then there’d be no going back. I said so. The answer was an assertive thump of hammer on chisel followed by the crumble of concrete landing in rubble. “The stonework is lovely” she said, and I groaned – we were committed. “Don’t worry,” she chirped, “it’ll all come away in sheets and chunks,” then, to reassure me, she added, “you’ll get it off in no time with a Kango!” This was the root of my fear: she often takes drastic action in my absence and starts a job which I have to help finish.

When a major household task looms, my preferred strategy is avoidance: I try not to think about it too often in the vague hope that either we win the Lotto or it the fairies will fix it. This approach to life has, for the most part, helped me breeze affably along – except for the intermittent bursts of gibbering panic, of course. My wife’s disposition also allows her to enjoy the moments of plain sailing when the wind is at our backs, but when bad weather comes she faces it briskly and squarely. We get a lot of bad weather in Wicklow and this is the problem.

Our cottage is covered in concrete but was never designed to be so. This has a detrimental effect on the house’s weather-proofing efficiency which has annoyed us for years. We long ago realised that the cement render intended by whoever added it to keep the rain out has the additional effect of keeping damp in – the house can’t breathe the way it would have when first built.

Most of our insulation issues are caused by 1980s’ remedies being anachronistically applied to an 1890s’ building and the clear implication is that the solution lies in returning to older ways. The internet has taught us this. We’ve discovered a website that celebrates plaster, lime, wool and reclaimed timbers. Our new digital gurus advocate ditching damp-proofing and gypsum. They also recommend stripping the concrete and replacing it with malleable, breathable lime render.

To further my education, I was dragged, on a day off, to see a nearby cottage conversion – or more accurately a “reversion” to more traditional insulating techniques better suited to old stone dwellings. It was high noon when we arrived. Hay bales dotted the hillside and swallows flitted through the drowsy summer air.

The building’s interior rooms were warm and dry so the lime render clearly worked, although that may partly have been the surrounding heat. Two of the exterior walls had been stripped back to reveal a pleasing patchwork of irregular, rough hewn granite interspersed with slabs of slate and shale – all very easy on the eye. The light, sandy yellow tone of the lime pointing chimed with the sunshine and open sky – unlike the more familiar mortar I could see in my mind’s eye: that grim, grey cement reminiscent of wet, windswept city streets. Perhaps the benign weather was informing my view and I wondered if I would have been shown the project had the morning been foul.

I was especially enticed by the squat solidity of the cottage’s smoothly carved granite corner stones, or coigns. We have the same feature in our house – we can see their outline – but the concrete render is flush with them. When it’s chipped away will there be adequate depth for the lime replacement, which needs to be an inch or two thick for maximum efficiency? And also: what exactly will we find if (I mean when) we strip it away? Then what’s to be done with all the rubble? I am not aware of any entirely ecological recycling options.

The following weekend I was mildly encouraged by what she had revealed – at ground level anyway. The stone is attractive and richly textured. She was right. But back in the city again, the project seems fraught with worry. I know she won’t stop. I picture her swinging a lump hammer perched up a ladder. And what about the electricity cables attached to the concrete cladding under the eaves? Then I got another call – the Kango is booked for my next day off.