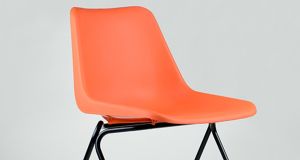 If you’ve ever sat in a waiting room, a school hall, community centre, slightly grim office or any place that requires multiple chairs that can be shifted aside, stacked for storage or taken away at a moment’s notice you’ll recognise the “polyprop” chair.

In a warm room it can be a sticky piece of furniture but that has not stopped the chair from becoming one of the most prolific pieces of modern design. It was designed by one of Britain’s most influential post-war designers Robin Day – and so brings top-class design to the everyday.

Made from a moulded polypropylene shell – a daring new material in 1962, not usually considered for furniture and fastened to an enamelled bent tubular steel base, it is easily light, stackable and available in a range of colours. It was first made by Hille – where Day worked – a British manufacturer which has gone on to sell more than 14 million units of the stackable chair, but licensing of the design resulted in an estimated 50 million more.

The chair was one of the British design classics featured in a series of eight stamps.

What sold for €250k in Drumcondra, Swords, Kilkenny, Waterford and Sligo?
4

The disappearance of Trevor Deely, part 1
7

Vol-au-vents are back: puff pastry towers get a timely, tasty makeover
9