Inside Anthropologie, the cult lifestyle store coming to Ireland 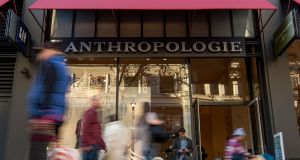 In the modern, multichannel shoppingscape, it is rare to hear shoppers sounding excited about a new store opening. Most brands can now be bought online, even if you have to jump through hoops to get it delivered to Ireland, making consumers feel somewhat jaded.

But with Anthropologie opening its doors in Belfast on Friday, August 23rd, social media and old-fashioned word-of-mouth fans are excited, and with good reason.

Anthropologie is one of the rare brand names that offers a real sense of discovery, the kind that an old-fashioned emporium used to offer. “It’s the kind of place you don’t go in to buy something specific. Its design appeals to all the senses and you probably end up buying five or six things,” explains its new European chief executive, Peter Ruis.

‘The brand’s DNA is gold dust,’ Anthropologie's European chief executive says. ‘There’s a real sense of wow when you take it somewhere new’

Its buying team purchases from every part of the globe, sourcing from very unique places but it is its ability to marry this with a genuine sense of visual theatrics that has endeared the brand to buyers.

“The brand’s DNA is gold dust,” says the chief who cut his teeth at John Lewis. “There’s a real sense of wow when you take it somewhere new,” he says. Like a cool auntie of an indeterminate age, it thrills all ages.

While the retail sector remains challenging with news of more and more store closures, this company is bucking the trend by expanding, especially in Europe, having opened its first store in London 10 years ago. Several openings are scheduled for 2019 - which started with Barcelona in February, Tunbridge Wells in April, Cheltenham in May, and Belfast, its first on the island of Ireland, this week. Two stores will open in Paris in September.

The URBN-owned brand Anthropologie was founded in 1992 by Hayne to give his existing Urban Outfitters customer a place to purchase when they had grown out of its offering.

The group also incorporates Terrain, a garden shop, and BHLDN, offering vintage-inspired bridal dresses. Anthropolgie now has 229 stores worldwide. Part of its success is that everyone within the team is always looking for new ideas for us to stock, says Ruis, including himself.

Last year while he was holidaying in South Africa while sitting down to dinner with the family one night he clocked the amazing plates the repast was served on. Wonki Ware, which uses recycled South African clay, now graces the shelves of the stores.

“We always check the provenance and a brand’s stockists. We don’t want what other retailers have bought,” he says. During his summer vacation this year on the Greek island of Pahros he’s been noting ceramics, photographing anything that caught his eye and sending it back to the team. “I’m always looking,” he says, and asking have you seen these.

He’s with the firm about a year having come to it from Jigsaw but really cut his teeth at John Lewis, whose exacting quality control standards are used as benchmarks.

The future, he says, is smaller stores that have a local flavour and that continue to drop new stock every couple of days to keep customers coming back. The Belfast shop will stock local brands Rebecca Killen ceramics and Enrich and Endure apron makers.

“The draw for shoppers is that it is an experiential offer,” says its creative director, Luella Lane, a formal ballet dancer who regularly returns to the boards to get inspired. The London-based executive goes to the theatre about once a week and this helps to feed the company’s visual merchandising ideas, a key ingredient is drawing shoppers over the stores’ physical thresholds.

Recent stand-outs for her include a really immersive production of A Midsummer’s Night Dream at the Bridge Theatre, and choreographer Matthew Bourne’s Romeo and Juliet at Sadlers – themes you can expect to see in stores in the coming months.

These germs of new ideas are then played with in the company’s art rooms, the brand’s beating hearts. Every store has a dedicated space there but, while an open secret, the ideas were executed backstage, out of the limelight.

Its recently opened Cheltenham store changed all that. It was the first to make the art room public. “We invest in a community of artists, including illustrators, painters and photographers, who are employed by us who are like magical elves.”

Local painter Sally Muir, for example, was invited to exhibit instore. Her work comprising dogs, people and landscapes, proved so popular at that, she was then invited to paint on a series of plates for the store. “Things like that happen organically all the time,” Lane says.

And the ideas these talents execute have a habit of living on way beyond their instore merchandising requirements.

The Barcelona team, for example, conjured up an octopus for its front window that was such a hit with shoppers and social media that it, now christened Octavia, “lives” at the city’s aquarium.

In London a whale that once graced the Regent Street store was then donated to the Natural History Museum and formed part of its recent whale exhibition.

The Belfast shop will have a giant autumn tree while a swarm of jellyfish will hang out in its home section. They will appear as if submerged in water while its art room will also host print, macramé, dye and calligraphy workshops.

“It’s about the right creative balances. There are no egos involved,” she says.

In a world where everyone is looking at the same algorithm dominated by Insta trends that are over before your purchase even arrives, it all feels refreshingly old school.