Early numbers dramatic, but expert warns not to expect them to solve rental crisis 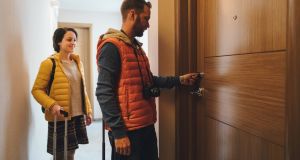 A significant number of one- and two-bed properties have arrived on the rental market in Dublin, 1, 2, 7 and 8

The rapid spread of coronavirus has prompted a flight from the Airbnb model of short-term rentals to longer term rental in key Dublin areas.

According to the latest listings from property rental website Daft.ie, the number of available one- and two-bed properties in Dublin 1, 2, 7 and 8 jumped to a five-year high of 535 on Tuesday evening.

The early numbers have certainly been dramatic, and are likely to become more dramatic still as those landlords who took advantage of the tourist boom over recent years to turn a quicker buck return their apartments and houses to the less lucrative and longer-term rental market.

Outside of the four postal districts that are within tourist-friendly walking distance of Dublin city centre, the migration of short-term rentals to the traditional rental market has been less pronounced.

The latest figures show the rest of Dublin has now registered a 22 per cent increase year-on-year in the number of one- and two-bed properties available for rent, going from 1,059 in March 2019 to 1,295 by Tuesday evening.

Beyond the capital the numbers have recorded a much smaller rise in the equivalent period, going from 1,889 available properties last year to 1,961 now.

So what to make of it all? Could this lead to the demise of short-term rentals or is it simply an unwelcome break in service for those involved in their delivery?

Estate agent and residential lettings specialist Owen Reilly believes the Covid-19 crisis will represent a fundamental challenge to Air BnB and the myriad of similar operators acting as intermediaries between landlords and tourists visiting here.

“I think it is a challenge. I think landlords won’t quickly forget what has happened over the past couple of weeks. From talking to the landlords who’ve contacted me, I don’t think they will be going back to Airbnb or any of the other short-term letting platforms any time soon.

“I would say there are a lot of landlords out there now who are happy to have [ordinary] tenants in their properties paying the rent, and who hopefully haven’t lost their jobs.

“I wouldn’t be so sure that landlords will go back to short-term lettings once the crisis has passed. Particularly those landlords who’ve been let down by their [short-term] operators.

“I’ve been telling some of our landlords this for a while, that at the first spot of trouble some operators won’t pay the rent. They’ll simply walk away, and that’s what’s happened. I think some of the landlords will be pretty reluctant to revert back to short-term rentals. A lot of them are talking to us, and they’re happy to rent their properties out for 12 months.”

While that’s a decision that may well be taken by hundreds of landlords, it’s still unlikely to make an appreciable difference to the availability or affordability of rental accommodation in Dublin or other cities.

Commenting on the current increase in the number of properties being advertised and the longer-term prospects for overall supply, economist with Daft.ie Ronan Lyons said: “I think this is evidence both of the truth in the anecdotes being shared about short-term lets making their way onto the long-term rental market now that the city-break market is completely on hold for the next few months if not longer – but also of the potentially limited scale that this transition will have."

“It of course remains to be seen how deep the real economic effects are in terms of lost incomes and jobs, and potentially on outward migration. But Dublin’s underlying shortage of rental homes is in the tens of thousands, not the hundreds, and thus those suggesting that the demise of the short-term let will ‘solve’ Ireland’s housing/rental crisis are likely to be disappointed.  Clearly if this were were to continue for weeks or months however, then it would represent a meaningful improvement in long-term rental supply.”

Will tenants have to prove they can’t pay rent?