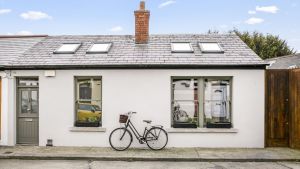 When architect Madeleine Moore bought number 94 Harold’s Cross Cottages she was taken by its potential. The Dublin 6 house had extensions and a southeast-facing side garden.

She demolished the existing extensions and created a better flow by extending the length of the original property, dropping the floor heights by about 30cm in the original footprint and by 60cm to the rear to get extra ceiling heights and then opened up the roof to create a vaulted ceiling.

The result is a surprisingly spacious and light-filled home beyond an unassuming exterior.

The house still opens directly into its living space, via a charming half door, made by Greenwood Joinery to Moore’s design. The area is broken plan with a seating area set around the original chimney breast. She replicated the look of the original front window using a pair of double sashes and added a wall of glass at the end. This overlooks the garden, and the house cat even has her own cat flap.

The main part of the kitchen is galley-style and set into a niche so it recedes rather than intrudes, says Moore.

A long, low set of shelving runs the length of the room. Moore has used low-set, cast-iron Zender radiators which are set below eye level and recessed into the floor, and where the sliding iroko doors lead out to the kitchen, she installed a custom-made Meinertz radiator to counteract any downdraughts. Several vertical radiators provide warm banks of wall.

The solid American-oak floors float above a thermal underlay contributing to the impressive B3 energy rating, considering that the refurbishment was completed back in 2007.

To the rear there is a utility and two of the property’s four bedrooms. These share a bathroom and the far bedroom has direct access to the garden via a patio door.

The centre of the house is lit by rooflights that brighten the stairwell and the smart use of space has managed to hive in a home-office area on the upstairs landing. Upstairs there are two more bedrooms. One is used as a second home office but could equally be a bedroom. The main bedroom has lots of built-in storage and a tiny balcony that overlooks the garden.

The garden is decked in hard-wearing balau timber, and there is pedestrian side access. At the end of the garden is a shed for bike and barbeque storage, complete with ladder leading up above to a raised deck. The garden adjoins Cathal Brugha Barracks.