Clean, wipe, brush and go: how to paint a room like an expert 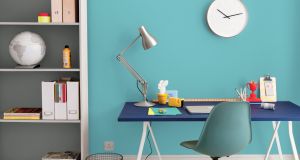 Don’t do it in half measures: One room will probably take one and half to two days to complete.

With much of the of population in self-isolation, the containment has brought the walls, floors and woodwork of our homes into far sharper focus. Scuffed skirting and doors, marks on hall walls from footballs and buggies, kitchens that need a refresh, have become a distraction from work and chores and may explain the recent spike in paint sales of between 100 to 200 per cent, according to Derek Byrne, marketing manager with Irish paint company Fleetwood, which has 25 per cent of the overall Irish market share, in second place behind Dulux.

“Mother’s Day sales were overtaken by paint sales,” says Johnny Plower, director at the second-generation hardware shop Weirs of Baggot Street in Dublin 4. They are up, as much as 40 per cent. They stock Colourtrend and chalk paint brand Frenchic and it is the latter that has really captured homeowners’ imaginations for its ability to transform furniture and interiors in an afternoon or a couple of days. Its Lazy formula, €29.99 for 750ml, is sold with wax already in it, manna from heaven for those of us who found the faff of having to wax furniture after painting it too much to bear. A second option is its Alfresco range. Designed for outdoor use where it can be applied to tired decking, garden furniture and fencing, it has been appropriated for indoor use.

Plower, who like most of us is working from home, recently used this range to transform his kitchen with a couple of simple brush stokes. Following on from a general trend towards restful greens and moody blues he painted his island base in Hornblower Blue and used the same colour on the base of the kitchen table. He painted the top in a lighter shade called Cool Beans. The Alfresco range can also be used on uPVC windows to give the bulkier models a fashionable colour lift.

The vast majority of the paint being purchased through its big suppliers is in snow white, almost as pure a white as you can get, he explains. Eider white is another popular choice. “It’s a warmer tone that feels fresh,” he explains.

He says those buying are all DIYers, rather than tradespeople, and are opting for fashion’s new palette, neutrals, soft shades that may look a little wishy washy on a colour card but when amplified onto four walls and in some cases, the ceiling, considered a fifth wall, they can be transformative. These cost €27 for 2.5litres.

Fleetwood’s Grey Nuance currently accounts for about 15 per cent of its sales, Byrne says. It is somewhat confusingly named for it is really a green-grey with blue undertones that can flit between the two depending on the light, time of day and orientation of the room. It’s less intense than traditional French Grey, so called because it was inspired by 19th century French decoration and wallpaper. “It works in all rooms but especially kitchens and bathrooms,” Byrne says.

Powdered Almond is a traditional soft taupe that looks great on woodwork in period homes or can be used to discreetly highlight out cornice and ceiling details. Eight per cent of Fleetwood paint buyers are opting for this colour.

Evening Skyline is a cool grey that has a touch of violet. It works well in a living or another room used after dark. Six per cent of Fleetwood’s paint customers are choosing this colour. Interior emulsion is by far the most requested paint type, Byrne says.

Seranta is a soft baby blue with hints of green that make it a serene choice for childrens’ rooms, bedrooms and for furniture and it is this latter category that is mostly driving sales of Fleetwood’s Advanced paint formula, €24.99 for 1l.

This period of self-isolation has jump-started an upcycling craze that has been building for the past 18 months, says Byrne.

“People can lose themselves in upcycling a piece of furniture or giving a front door a fashionable new coat. It’s a task that requires some preparation, it may just be wiping it clean with a damp cloth and letting it dry out or giving it a gentle sand first before applying the first coat. This is a water-based paint, is touch-dry in 30 minutes, which means you can have the work done in a few hours or days, depending on what you’re doing. It’s also kid-friendly in that it’s water soluble and washes off little hands easily. The range is also low in volatile organic compounds, that elicit that strong paint smell. There is still a slight smell but it disappears in hours rather than days or weeks.” This chimes with Weirs purchasing patterns.

Between staff out and business spiking it’s been crazy, says Stephen Barrett, store manager at MRCB, Cornmarket, in Dublin 8, which is now owned by General Paints Group, which makes the brands Colourtrend and Curated.

“There’s a run on everything, it’s across all the brands we stock. People are isolating for a couple of weeks and want to get jobs done. My own wife asked me to take a look at what needs freshening up.”

So what if you don’t know what colour to choose? Well, Colourtrend has moved its home colour consultations online and will be waiving the usual €125 fee for this service to make it free to use. Its consultant will put together a bespoke scheme to match a person’s home and personal style and will also provide advice on choosing the right products for the project. Crucially, as more and more retailers close, the paint company is also offering free delivery on all orders.

Preparation is key, says painter and decorator Oisin Butler. You need to give parts of the walls a bit of a rub down and can use washing up liquid and water to clean areas around light switches, and sockets. Ditto woodwork that gets a lot of traffic such as the areas around door handles. If you’ve had smokers in the house then use sugar soap to clean walls and ceilings. A great product for cleaning tiles and kitchen areas is Krud Kutter, he says.

You can lay lining paper, a wallpaper underlay that you can buy in all good décor shops, set to the edge of skirting boards, to protect flooring. Then paint the edges of the walls and socket and light switch surrounds before starting about a foot from the end of the wall and roll up and down. This gives you room to disperse any paint build-up onto the wall rather than corners.

For ceilings use a stepladder to fill in the edges and then an extended roller, rolling the paint from left to right, starting from the window and working your way in towards the dark side of the room. This better lets you see what you’ve already covered. He recommends mid-range brands like Colourtrend and Dulux and suggests using good brushes, a brand like Purdy with synthetic bristles working best with water-based paints because they have an acrylic base.

Should you get the whole family involved? Butler’s answer is an emphatic no. “Get whoever is capable and competent to help out. Otherwise you will get in each other’s way. A teen child may be able to take smaller kids out of the way while you and your partner can crack on.”

He suggests painting one coat to help you better see what cracks need filling.

Choose which room you decide to paint wisely, he cautions. With everyone cooped up at home it may not be wise to start painting the living room, essentially locking out family members from their most comfortable seats and the location of the biggest screen in the house. Before you start move everything to the middle of the room. One room will probably take one and half to two days to complete. “Don’t do it in half measures,” he says.