Three to buy in Mount Merrion: one done and two with potential

How much work do you want to do in this pricey D4 suburb? It’s your choice 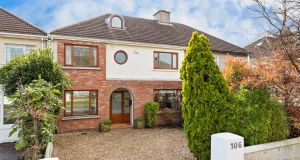 Description Three-bed extended 1950s semi
Price €950,000
Agent Lisney
Number 106 Trees Road Upper was a standard 1950s semi with side garage before the current owners did major work about 13 years ago. They built to the side adding a two-storey extension to reorganise the bedrooms and add a playroom/study; pushed out at the rear for a large, light-filled modern eat-in kitchen and utility; and went up into the attic, as seen from the front dormer and an even larger dormer window to the rear.

Now the semi has 217sq m/2,335sq ft, three bedrooms, one en suite and with a dressing room, while the attic room is also used as a double bedroom. The downstairs playroom to the front could also be used as a bedroom as it is adjacent to a shower room.

Storage is a feature throughout, with a bank of cupboards in the hall and built-in wardrobes in most bedrooms, while iroko wood was chosen for the new staircase and doors. The family bathroom, like the en suite and shower room, date from the renovation and are fully tiled with quality fittings.

The south-facing rear garden is about 25m/82ft long and there is off-street parking to the front. Buyers of any property will always find something to do and here, while the major work has been done, every room could be repainted. There’s also the D2 Ber which could be improved upon. Number 106 Trees Road Upper is for sale through Lisney asking €950,000.

Description Four-bed Kenny-built semi-detached house with large garden
Price €950,000
Agent Lisney
Number 26 Greygates isn’t being sold as a family house with a site even though there is planning permission for a three-bed two-storey detached house in the side garden. That’s because it’s more than likely that given the neighbourhood – Mount Merrion has long been a suburb popular with families – the buyers of the 145sq m/1,560sq ft Kenny-built semi will be more interested in renovating and extending the house rather than also embarking on a development project.

A canny buyer with an eye on future downsizing or a home for an adult child, however, might leave that as an option for the years ahead.

The double-fronted house, at the end of the Greenfield Road cul-de-sac, built at an angle and now facing on to the N11, is an executor’s sale. While it was extended about 12 years ago and some improvements made, such as new windows and a new kitchen and decorative elements such as white marble chimneypieces to replace the original tiled versions, it would benefit greatly from updating.

Appealing features, common to Kenny-built houses in the area, include gently curving bow windows to the front, red brick detailing and a covered porch (original brochures pointed out how handy and healthy this was for prams).

There are four bedrooms, one en suite, two reception rooms, that dining room extension off the kitchen. The Ber is E2. The back southwest-facing rear garden is small relative to the size of the house but the large side garden which includes the original garage provides valuable outdoor space shielded from the road behind mature hedges.

There is off-street parking to the front for three or four cars. Lisney is the agent selling 26 Greygates, asking €950,000.

Description Detached four-bed 1930s house on corner plot of 0.23 acre
Price €1.195 million
Agent Lisney
It is possible that the owner of 22 St Thomas Road might just be the longest resident in Mount Merrion. Her parents bought the house when she was just five years old; that was 85 years ago, and she has lived in the 1930s detached house since.

Part of the attraction then was the large corner site. It stands on 0.23 acre, and the long rear garden was once filled with vegetable plots, fruit trees and a glass house for growing tomatoes; the family employed a gardener to keep it in check.

There have been many changes to the striking looking house with its tall red tiled pitched roof over the years, the most material being the one-bedroom 65sq m/700sq ft granny flat built to the side in the 1970s. It is accessed from the front via its own front door and also through the house.

With 122sq m/1,313sq ft, the house has four bedrooms, two reception rooms, a small kitchen (with a lovely original terrazzo floor) as well as a family bathroom and sunroom.

Its orientation (south facing to the rear) and location, St Thomas Road is regarded as one of Mount Merrion’s top roads, will encourage buyers – that and the potential. Given its corner position, large plot and the fact that it is detached and needing considerable updating, it would not be too surprising if the buyer seeks to knock the house and start again. A small developer might have even more ambitious plans.

Someone though who appreciates the character of this property might embark on a considerable renovation project, knocking that granny flat while also extending to the rear while still having plenty of garden. Lisney is selling 22 St Thomas Road, seeking €1.195 million.

Have I got the flu or Covid-19? Could I have both?
Real news has value SUBSCRIBE