From shower style to the ultimate chair: eight great Irish designs for now 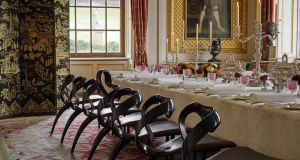 Joseph Walsh Studio: prototypes for a set of 24 Chatsworth chairs

1. Are you sitting stylishly?

Top of the heap is Joseph Walsh Studio, based in Riverstick, Co Cork and whose work features in some of the world’s best museum collections including MoMA and the Pompidou Centre in Paris. The National Museum at Collins Barracks in Dublin has two pieces; Suaimhneas, a rocking chair from 2004 and the Enignum canopy bed. Pictured here are prototypes for a set of 24 of its Chatsworth chair, one of which was acquired by New York’s Metropolitan Museum of Art last year. The studio has wowed at fairs in Milan, Basel and Miami and Walsh has found time to run a highly successful annual event aimed at designers, makers and curators. Dommus is Walsh’s entry-level chair. A limited edition, all-wood model, in white oiled or ebonised ash, starts from €10,600. One-off commissioned chairs start at €28,500 each. josephwalshstudio.com

One of the oldest firms in Ireland, Belleek is returning to its roots with its new Flex mug, €25, which features a mother of pearl lustre glaze, a second glaze overlaid between the second and final firing of the parian china. It’s a decorative signature that the Co Fermanagh-based firm has been using since the 1870s when founding partner, Robert Armstrong strove to use a soft shade inspired by the iridescent qualities of sea shells. Designer Clare Conway has resurrected it for use in this embossed mug, its texture a stylized version of Fermanagh’s rolling landscape. You can see the same glaze in many of the historic basketweave pieces, some of which are also on display at the visitor’s centre where you can dine on the brand’s wares. belleek.com

Berlin-based designer Nessa Finnegan’s Sheela na Gig tea towels, €10 each, turn the mundane into, well, a very affordable style statement. Inspired by stone carvings of women with large heads in standing or squatting positions, to better display their vulvas, they have been considered potent fertility symbols by some and a way of blinging up 11th-century castle decor by others. Some inhabit well-known tourist attractions, if you know where to look. One of the best examples is on White Island, on Lough Erne, Co Fermanagh, but more accessible exhibits can be seen at Bunratty Castle, the Rock of Cashel, the wall of the church in the Malahide Demense and in the National Museum of Ireland. The Heritage Council’s interactive map plots the locations of more than 100 of them. Buy Finnegan’s work at Designist. designist.ie

Through her firm Kingston Lafferty Design, current president of the Institute of Designers in Ireland Róisín Lafferty has garnered a cool following. Her signature is a refreshingly bold use of colour that appears effortless but anyone who has tried to emulate it will know it looks a lot easier than it is. She applies the same confidence to mixing textures, from lighting choices to walls and flooring finishes creating spaces you really want to inhabit. Her work has featured in Architectural Digest (Italian edition), and numerous local glossies. Pictured is a property in Donnybrook that has been painted using Fleetwood’s Vogue paints. kingstonlaffertydesign.com

Dolmen Design & Innovation’s work with Merlyn Showering has won the firm a Red Dot Award for its Arysto 8, an 8mm-thin seamless glass shower stall with self-cleaning rollers within its doors to make for less maintenance. Its more recent additions to the line include the Arysto X, a frameless, sliding door in easy clean glass that gives less visual bulk and is available in brushed brass, pictured, black or nickel finishes. Seen here is a highly engineered, hinge shower door and two inline panels, from €2,597, and additional side panel, €675. Prices are ex VAT. The company also worked with baby range Clevamama on its foldable baby bath, €44.99, that stores flat. merlynshowering.com; dolmen.ie

The Hub Controller is an Irish designed smart thermostat, created in 2015 by Kim MacKenzie Doyle for Tallaght-based Hub Controls. While adhering to the Model T Ford school of colour – available in black only – its software has been upgraded several times since launch and while the first products were made in Ireland production has been moved to Taiwan. While similar to Nest or Hive and compatible with oil, gas or electric heating systems its smart algorithms are also designed to reduce energy consumption while maintaining optimum heat levels in your home and says it can reduce energy consumption by over 28 per cent. It costs €269, ex installation (about €50 or €60, says its sales and marketing manager Graham Merriman). thehubcontroller.com

Designer Suzie McAdam made her name with the refurbishment of the John Castle-designed Palladian mansion Bellinter House, on the banks of the river Boyne where she installed graphic timber tiled flooring and furniture by the decorati’s favourite maker John O’Connell Furniture. She has carved a niche for herself remodelling period redbricks in Dublin 4 and 6 and adding punchy decorative elements like these printed tiles, in the shower stall of a home on Palmerstown Road. The image is The Surprise by Claude-Marie Dubufe, from London’s National Gallery and is fired on to high quality, square ceramic wall tiles by UK-based Surface View. Prices from €840. Last month McAdam opened The Design Seeker, an interior design shop in Monkstown. suziemcadam.com; thedesignseeker.com, surfaceview.co.uk

The Design and Crafts Council of Ireland has a huge range of members whose work is worth exploring further. Notables include Coolree Design, a firm that launched a smart range of side and console tables at Showcase last January; Ryan Connolly, whose work forms part of Generation, where makers continue and/or reinvent the work begun by previous generations of their families (the show continues at the National Design & Craft Gallery in Kilkenny) and Kieran McNeely whose walnut-topped keepsake boxes are something to treasure. coolreedesign.ie, connollyandcompany.com